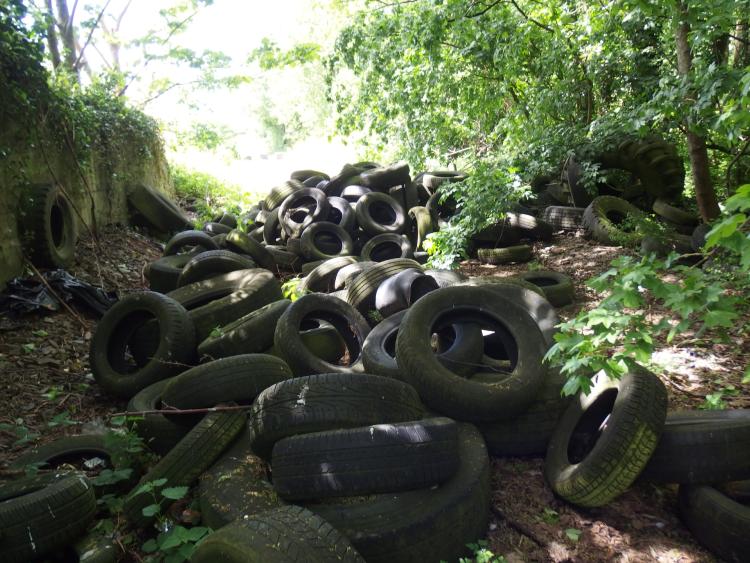 Environmental campaigners have welcomed the new Waste Tyre Management Regulations and called on the Joint Committee on Communications, Climate Action and Environment to give them their full support.

However, the Environmental Pillar claims it has also learned that the Joint Oireachteas Committee scrutinising the legislation is being lobbied by the tyre Industry and by some TDs in an attempt to block or water down these valuable environmental regulations.

In a letter sent this morning, the Pillar - an advocacy coalition of 26 national environmental NGOs - has written to the Joint Oireachtas Committee members calling on them to ignore the lobbyists and do the right thing for Ireland and the Environment.

The Pillar said that it is a disgrace that tax payers, local authorities and community groups have to pick up the tab for the tyre 'industry' in clearing illegally dumped tyres.

Hundreds of thousands of used tyres have been illegally dumped around the country, causing health and environmental hazards, rather than being recycled and creating useful employment.

Environment Minister, Denis Naughten recently signed regulations to establish a full compliance scheme for tyre operators that will operate in the same way as the Waste of electrical and electronic equipment (WEEE) or Farm Plastics schemes.

The Minister's action will increase the number of Irish tyres that are properly recycled and create the basis for an Irish-based tyre recycling facility leading to the creation of around 400 jobs and a reduction in tyre dumping and littering.

The Environmental Pillar welcomes this move and calls for even stronger regulations.

Mindy O'Brien, of VOICE, speaking on behalf of the Environmental Pillar said:

"Dumped waste tyres are a major litter and environmental problem in Ireland.

"They do not break down naturally so when a tyre is dumped, it remains in the environment for thousands of years. In addition there are very serious health risks associated with burning of tyres, which give off highly toxic fumes and are nearly impossible to extinguish.

"Environmentalists have been campaigning for regulation of the used tyre industry for years and we welcome the move by Minister Naughten. However we are very worried that the regulations will be blocked or watered down by lobbyists for the tyre industry.

"Currently there is no tyre recycling facility in Ireland and very lax regulations on disposal so used tyres in Ireland are either dumped illegally or they have to be shipped to England or Europe for disposal," said Ms O'Brien.

Dear Deputy Naughton,
We write to you in your role as Chair of the Joint Committee on Communications, Climate Action and Environment.
We note that the committee recently reviewed the Regulations outlining the new used tyre compliance scheme to be managed by REPAK ELT.

We understand that a few T.D.s outlined  their concerns with the Regulations and encouraged the development of new primary
legislation for a self-compliance scheme for the tyre industry. We must voice our opposition to this approach, which is only designed to delay this essential legislation in the hope that it will never be enacted.

We believe that the industry is not in the position to create a transparent licensing and tracking system to ensure the proper treatment (either through recycling, recovery or disposal) of used tyres given their past history. Historically, the tyre industry established its own compliance scheme, TRACS and TWM in 2009, which was judged to be ineffective in
tracking flows of used tyres as between 25-50% of waste tyres were not accounted for.

As a result, there are numerous legacy illegal dumps around the country with hundreds of thousands of tyres, which pose an environmental and health threat. Minister Naughten has allocated €1 million to clean up the over 750,000 tyres stockpiled in these illegal dumps.

To date, there has been no cradle-to-grave tracking of the management of used tyres. We therefore conclude that an independent body should be established, in order to ensure transparent data and tracking management.

Electronic Equipment (WEEE) scheme. Consumers understand that there is a fee in the proper management of their goods at the end of their life which embraces the polluter pays principal. Fourteen European countries have a similar Producer Responsibility Initiative model.

We also advocate for a more robust enforcement environment to ensure that tyre producers/importers, wholesaler, retailer and consumer account for the proper end of life management of their used tyres. At present Local Authorities and community groups are picking up the tab for cleaning up the industry’s mess.

Lastly, REPAK estimates that this Producer Responsibility Initiative (PRI) will support 484-660 primary and secondary jobs in Ireland through the collection, processing, transporting, recycling and recovery of used tyres. We hope that Ireland will replicate the success achieved under Belgium’s PRI scheme, where up to 50% of its used tyres are recycled and nearly all are accounted for.

We urge your committee to accept the regulations developed over the past two years by the Department of Communications, Climate Action and Environment (formally known as the Department of Community, Environment and Local Government), REPAK and the industry without further delay. ELT fees have been collected under the new regulations since the beginning of October for the sale of new tyres and it would be a waste of taxpayers’ money to go back to the drawing board and start anew. This delay will result in an increase in the stockpiled tyres throughout Ireland’s countryside, creating fire and toxic
smoke hazards.