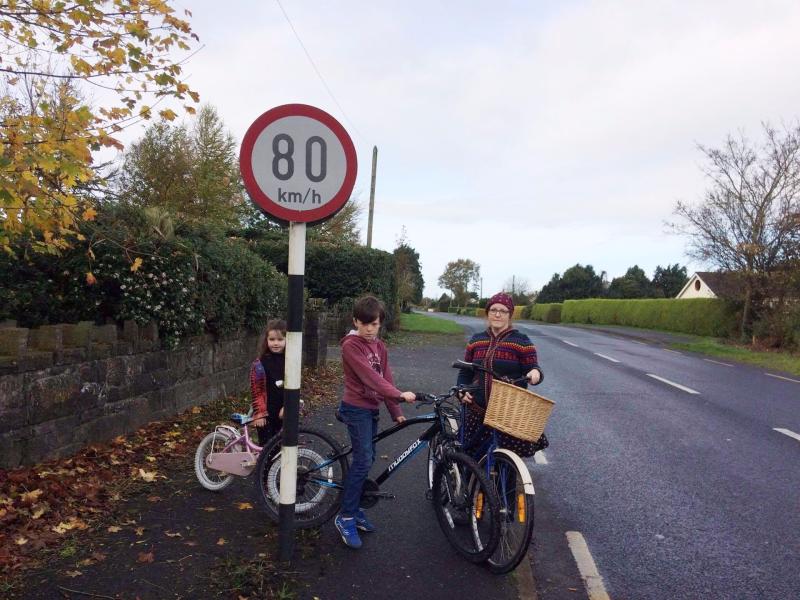 Residents of a busy road leading into Mountmellick in Laois have begun a petition to demand lower and clearer speed limits, because they fear for their lives.

Hundreds of residents from Debbycot, The Rock and The Commons, on the Emo road into Mountmellick, are demanding lower speed limits.

An online petition set up just two days ago by mother of three Annette Morris Keane, has gained over 200 signatures in the two days.

"I set this petition up because having witnessed and been told of many dangerous incidents on this stretch of road, I am extremely worried someone and more specifically a child will be seriously injured or killed due to ineffective speed limits. I would like to be able to take a walk or cycle on the path with my chlidren without it being such a worry," she told the Leinster Express.

She said the rapid change in speed limits leads to confusion and speeding.

"These speed limits are nothing short of chaotic and a danger to all using this road," Ms Morris Keane said.

In the opposite direction, there are six speed changes, from 80km, to 60km, 30km, 60km, 80km and then 50km at the Mountmellick town boundary.

Despite there being footpaths and lights to Debbycot which has about 20 houses lining both sides of the road, it is in the 80km/h zone.

The residents want this reduced to 60km/h, which they say was once the speed limit.  They are gravely concerned for the safety of residents, road users including pedestrians, cyclists and drivers.

"The current increase to 80 kph limit on this road has already caused a number of accidents and we are extremely concerned this will eventually lead to fatalities.

"There are a number of children living, walking and cycling along this road on a regular basis. Vehicles coming from Mountmellick leave a 50 kph limit and immediately enter an 80 kph area encouraging them to quickly increase their speed along a short straight road. The increase in speed on this road makes it extremely dangerous for residents exiting their properties as vehicles are overtaking at speed," Ms Morris Keane said.

"This in turn encourages drivers to continue with this speed through the following very short 60 kph zone outside the GAA grounds also used by The Rock school children. These vehicles then enter The Rock school 30 kph limit at a dangerous speed," she said.

The residents are also asking that all speed limits on the 3km stretch be re-assessed in consultation with a Residents Action Committee "to reflect a safe speed within clear and consistent limits for all persons using this road".

Among those who have signed is Mary Coss.

"My home house is on this road and one of these days I feel I'll be run into entering/exiting the house & my mother is too scared to walk this road after having a very narrow escape from an accident as she walked by a speeding car," she commented.

Another resident signing is Caroline Bentley.

Ms Morris Keane intends to present it to Laois County Council's Director for Transportation Kieran Kehoe, and to county councillors on November 9.

It is the second petition this year in Mountmellick over concerns for speeding motorists.

Irishtown resident Lexy Norton earlier this year presented a petition to the council against Transport Infrastructure Ireland's plan to raise the speed limit on the N80 outside her home. read here.

Last weekend her car was among three badly damaged in a drive-by smash up. Read here.

The TII and Laois County Council recently held public consultations as part of a nationwide Speed Limit Review. No final report has been published yet.