The first traffic lights to be installed in Portarlington in Laois have been quickly adjusted by Laois County Council, after traffic tailbacks caused many driver complaints.

The new lights are at the busy junction of Main Street and Crowe Lane beside Portarlington library.

They were installed at a cost of €65,000, to make it easier for pedestrians and drivers using Crowe Lane to access Main Street.

They were switched on last Friday June 8, but resulted in tailbacks along Main Street, and many angry comments on social media.

Portarlington Cllr Aidan Mullins asked for patience until the sequenced timing of the traffic lights was adjusted.

Yesterday Tuesday June 12 the adjustments were made.

"The new signal controlled Crowe Lane / Main St  junction arrangement became operational last Friday. The upgrade was designed and installed following requests to improve the operability of the junction and make it safer for pedestrians.

"As with all new such installations their initial performance is monitored and the necessary adjustments (if any) are made – the adjustments made here were to minimise the timing to Crowe lane and prioritise the main street traffic flow. This has been done and recent observations at am peak have recorded that is operating very well," Mr Kehoe told the Leinster Express.

"Also observations have confirmed that pedestrians and in particular children who walk to and from school now have a safe method provided for crossing the road and this is very much welcomed for this busy junction," the council Director said.

Cllr Mullins said that a box will also be installed for cars turning right onto Crowe Lane which is also causing traffic delays.

"The system will be programmed to give extra time to Main Street traffic during peak times and will revert to current settings during normal traffic flow. It is expected that this will reduce the queues and delays now being experienced during rush hours. A further review will then be carried out," Cllr Mullins stated on his social media page.

Below: the junction before traffic lights were installed. 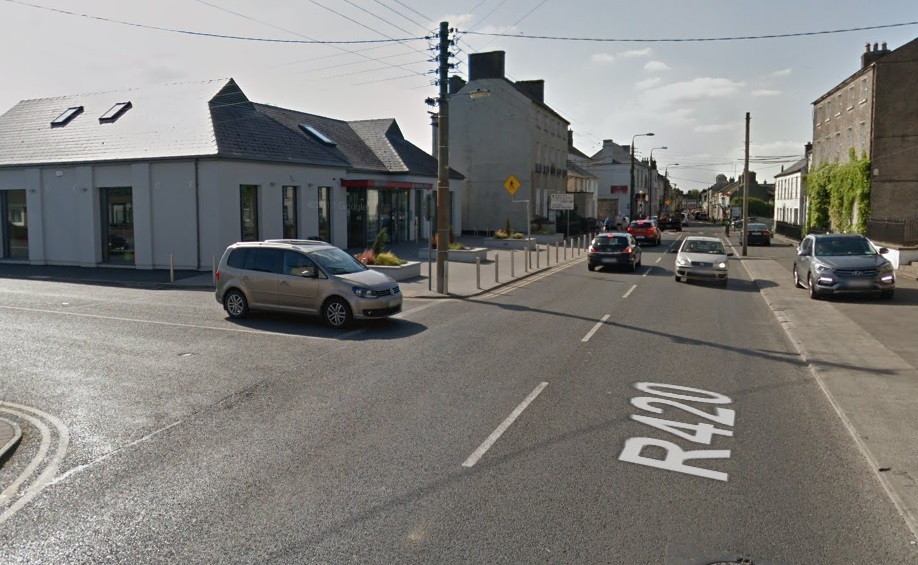