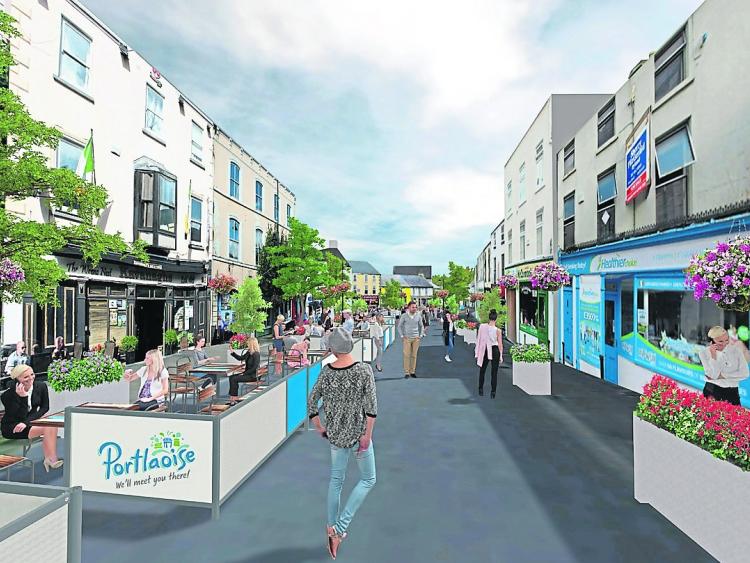 Artists impression of a pedestrianised Lower Main Street in Portlaoise, set to happen this July and August.

A temporary full pedestrianisation of Portlaoise Main Street and side streets is to be trialled after four local councillors demanded it from Laois County Council.

The council has proposed a temporary pedestrianised road on lower Main Street for July and August to help businesses be Covid compliant, with the street to be used for socially distanced seating and outdoor shop queues. The measure was decided after consultation with Downtown Portlaoise traders, Laois Chamber of Commerce and some individual businesses.

However businesses on other sections of the Main Street would be “excluded” claimed some councillors who say they have been contacted by these businesses.

They are also angry that they were not consulted prior to the council advertising their intention last Tuesday in local papers.

Part of Lower Main Street is proposed to be closed to traffic from from 11am to 5.30pm, from July 2 to August 30.

Following a 90 minute discussion at the Portlaoise Municipal District meeting on Tuesday, June 17, the council Director of Services Simon Walton who is also Portlaoise Town Manager, proposed that the full street can be trialled for a few days during the two month period.

The plan includes removal of bollards and railings, putting in “soft landscaping” and permanent new street furniture, with alternative parking on side streets.

“We will engage with businesses and facilitate them where we can. We feel this option is best. The main street of the principal town in Laois will be covid compliant, it sends out a clear message to the county that Laois is open for business,” the Town Manager said.

Cllr Mary Sweeney had claimed that businesses were being excluded.

“To me it excludes the Top Square, I feel that while we have to be covid compliant, two or three places were exempted in Top Square, it’s very disappointing,” she said.

“You had no right to go ahead without us, we had no say. The first I heard was when I read it off the Leinster,” said Cllr Willie Aird.

“You can’t play one business off another. I was contacted by other other businesses not included, saying joe public can go up the street and sit outside a business but not theirs. You will have more job losses in this town if we don’t give everyone a level playing field,” she said.

“I am getting it in the neck from people who say it’s totally unfair they are being ignored. Do the whole street or none at all,” Cllr Noel Tuohy said.

Cllr Thomasina Connell was the only councillor happy with the council’s plan.

“If the whole street was pedestrianised it would be a disaster. I don’t see the merit in trying to change the whole thing now. How would prison vans go to the courthouse? You would have prisoners being walked up in shackles from outside the cinema, that could even be a human rights issue,” she said.