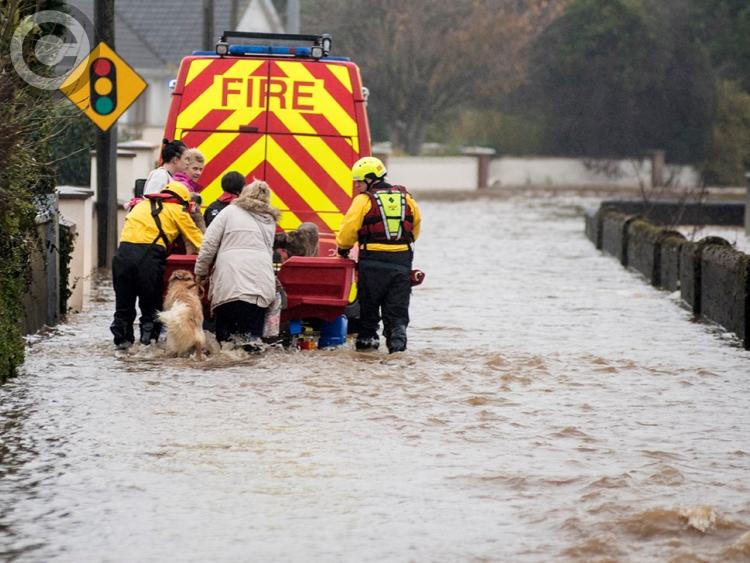 Evacuation in Mountmellick during flooding in November 2017. Pic Kevin Byrne

Plans for Mountmellick flood relief will be formally submitted to the Minister for Finance and Public Expenditure, Paschal Donohoe, for approval once an independent review has been completed.

Flood walls, embankments and raised roads are in the plans to prevent future flooding in the town. The independent review of the plans is now nearing completion.

Details of flood defence works that are in the planning stages for Mountmellick have been outlined to the Leinster Express by the Office of Public Works (OPW).

The flood defences outlined for Mountmellick have been drawn up by engineering consultants working on behalf of the OPW and Laois County Council under the Catchment Flood Risk Assessment and Management (CFRAM) Programme.

A spokesperson for the OPW has stated some works that are in the plan for Mountmellick.

“Progression of the Mountmellick Flood Relief Scheme, comprising a series of hard defences consisting of flood embankments, walls and sections of raised road, to project-level development and assessment for refinement and preparation for planning/exhibition and, as appropriate, implementation.

In Summer 2017, the OPW finalised Plans for 300 areas of the country, including Mountmellick, which were submitted to the Department of Public Expenditure and Reform for an independent review of the environmental assessments.

This independent review is nearing completion, after which the Final Plans will be formally submitted to the Minister for Finance and Public Expenditure and Reform for approval.

Approval of the Plans does not confer approval to construct a scheme but rather approval to proceed to the next stages of design.

These next stages involve further detailed engineering and environmental assessment, design, public consultation and review of costs and benefits.

Feasible schemes following this further analysis will be constructed in line with normal planning requirements.

The Minister would hope in the coming weeks to seek the approval from the Minister for Finance and Public Expenditure and Reform for the Flood Risk Management Plans developed under the CFRAM process.

This comes as the possible plan for a flood wall was outlined during the week.