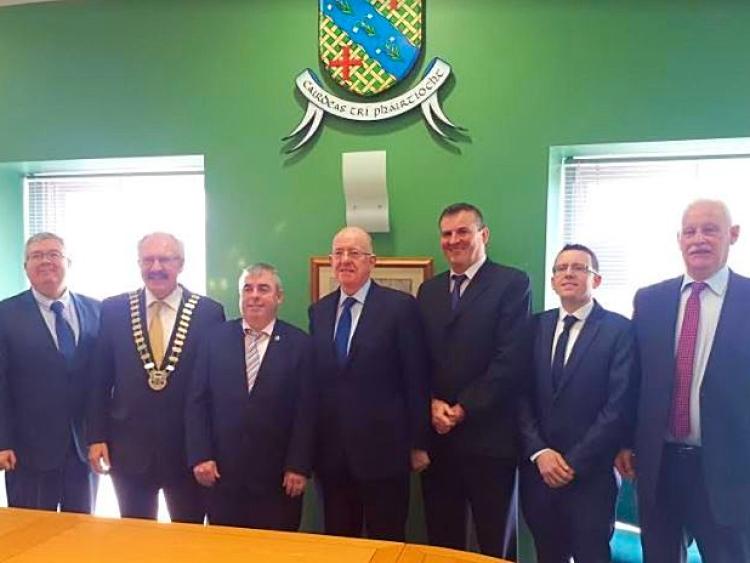 Residents in Mountmellick who were effected by severe flooding in November and numerous floods in recent years want their voices to be heard in the drawing up of flood defence plans.

A number of Mountmellick residents from O’Moore Street, Manor Road and Cloncannon attended the press conference with Minister of State for the OPW and Flood Relief, Kevin ‘Boxer’ Moran and Minister Charlie Flanagan on Friday morning.

Minister Moran announced that a budget of €3.1 million has been allocated to the design and development of a flood defence scheme for Mountmellick. He said Portarlington is included in this.

The funding was welcomed by Minister Charlie Flanagan and Laois County Council officials.

While residents welcomed the announcement of €3.1 million for flood defences for the town, some remain skeptical of the timeline and the design of the defences.

Mountmellick man, Maurice Lynch, whose home house on O’Moore Street was flooded in November and is still not restored said that he wants to see a timeline put in place and execution of plans.

“The budget allocation is great once it is not spent on stupid things like a whole lot of research and not a lot of work. I would like to see the timelines put in place for actual work to be done.

“Winter will come around again very quickly and we will see more flooding then if it is not done in the summertime.

"I want to see the plan with the milestones and the execution of that plan and making sure the flood defences are in the right place.

“No one can live in the house on O’Moore Street now, the insurance that came through was less that one third so there is very little I can do,” he said.

Manor Road resident, Olive Collins, said while her house escaped flooding because the water went through her shed instead, her home has been devalued just by being in the area.

"It is wonderful news and it has come so quickly but of course the proof of the pudding is in the eating so we have to see how it gets allocated. It is all very early days.

"There is a lot of local knowledge out there, people who know the area and know what happens when drains aren't cleaned and rivers aren't dredged.

"It is reassuring to know the funding is available, how it is spent is the most important part," she said.

Olive asked Minister Moran and Minister Flanagan if short term flood defences such as flood gates for doors was included in the €3.1 million.

"People in Galway have flood gates in and it never stopped the water, water will find its own level. Not one scheme ever has failed that the OPW has built, not one.

"I would not be back here as quick if I did not believe that the money we are providing is going to serve Mountmellick way into the future in terms of design and protecting the people for the next 100 years and beyond," Minister Moran said.

CEO of Laois County Council John Mulholland addressed the issue of a timeline for work.

"We have no time frames as of yet, it would be disingenuous to give you a time frame because the first thing, it has to be technically correct.

"It has to be up to a standard that allows for flood defence and climate change of 20 percent and probably more.

"Once we have that information we will come back to the community with a timeframe, generally what happens is that we are chasing the money but what has happened here is we have the money upfront which is a positive development and now we have a target to reach.

"We will be doing everything as urgently as we can but with due diligence as well we have to make sure it functions and it works.

"I think it is important to realise, the information we got, the on the ground information and the data we got from the flooding on November 22 has to be incorporated into a scheme review of the design because whatever scheme is provided has to be such that it has to leave the town safe.

"There would be no point in rushing ahead with a scheme based on previous data because what we learned about November is very important.

"There is a bit of patience required to run through these hydraulic models and the flooding patterns and the extent and scope of the flood.

"We will do that and this has already been prepared for the engagement of specialists who will be able to deal with this.

"Then we will be in a position to put a programme in front of the elected members of the council and the people of Mountmellick which will take into account consultation, sensitive areas, time frames, priorities and the engagement of the contractor to proceed," he said.

Mr Mulholland also said that delays in work like this is often caused by public concern or observation and he urged the public to trust in the flood defence scheme to fast track the process.

"Do remember that some of the high priority flood relief schemes in the country have been met by delay due to public concern or observation.

"It is important that the community completely understands what's going to be provided and where possible there is a uniformity within the community and an understanding that it is necessary and that obviously everybody has a right to make their observations but the more obstacles in the public consultations the more it leads to delay.

"There is an onus on the OPW and ourselves to provide clear messaging to the community. From that point of view that will be through workshops here and public information, that is part of the design and scheme how we communicate to people and what does it mean for your locality," he said.

Minister Moran outlined some of the progress that has already been made.

“The initial task will be the preparation of a brief for the appointment of engineering consultants to carry out the detailed design of the scheme.

"The detailed design will include a review of the CFRAM mapping taking into account the recorded flood depths of the 22 Nov. 2017 event and the identification of any additional flood defences necessary for the town.

“The Council will progress the outline CFRAM scheme for the town and manage it through detailed, project-level design, planning and construction with OPW support and funding. Consultants are to be appointed to carry out full project level detailed design following which public consultations and planning approval will take place and the appointment of a contractor," he said.

Laois flood defences in Mountmellick and Portarlington to cost €8 million.