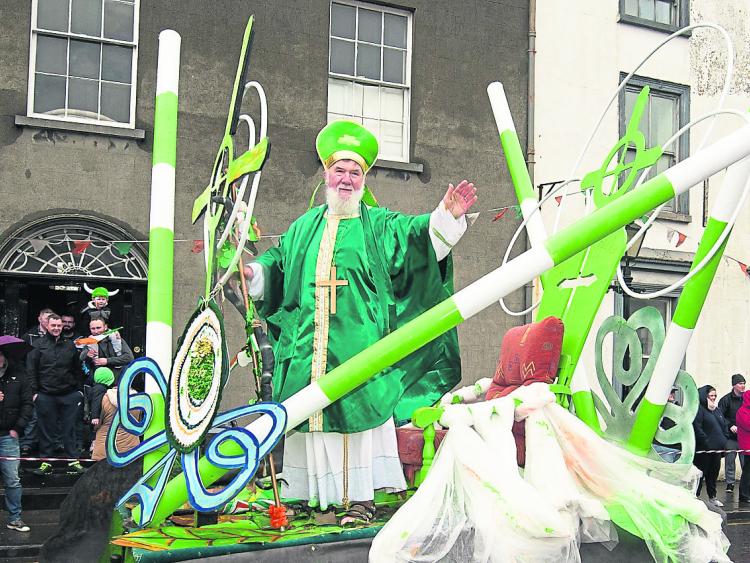 Plans are in place for a brilliant St Patrick's Day in Mountmellick this year with a farmyard and plenty of local music at the centre of the entertainment.

The festival fun is set to begin early in the day with music kicking off from 10am in O'Connell Square for anyone who is out and about early. The day is orientated around family fun with a vibrant take on the traditional parade.

Jason McInerny is the Chairperson of the parade committee.

"Our slogan this year is 'Mountmellick Together' and we are set to make our St Patrick's Day festival even bigger and better than last year.

"The overall aim is to put more visual display and more vibrancy into the parade. We aim to bring back more floats and create a more entertaining vibe within the town," he said.

Performance group Kiki Theatre will be bringing some amazing designs and crazy contraptions on the day. A community workshop was set up to create imaginative designs and structures for the parade. Mountmellick Flood Community Support, Mountmellick Celtic, and Team Laois Martial Arts were chosen by the committee to have floats designed and made for them.

The festivities officially get under way at 12 midday. Festival wristbands will be available from the parade committee stand for €3 per child which will allow access to the disco dome, inflatable activity centre with slides, amazing Nore Valley farmyard animals, sweets, treats and all entertainment bouncing castles.

The farmyard animals will only go ahead weather permitting due to health and safety standards. This will be decided 24 hours in advance by the committee.

The first 100 wristbands sold will also receive a free carnival pass for Mullin's Family Fun Fair and a 10% discount when you produce your wristband at Apache/Peking Mountmellick.

A 100% alcohol ban will be in force in O'Connell Square with gardai and security onsite to maintain an enjoyable family event.

Despite the cold weather forecast, large crowds are expected to flock to the streets of the town for the day.

There will be an amazing music performance from singer songwriter Tobi Akinborewa kicking off proceedings on the main stage at 12.30 pm followed by local MC Joe Laffin, accompanied by another local artist Stevie James Kelly who will also perform.

Tobi found his love of performing while at Mountmellick Community School, and credits music teacher Andrea Sacchi for encouraging him. He now studies science at Maynooth University while furthering his music career.

He performed at the Irish Youth Music awards at the Aviva stadium in 2015 and 2016, and released his first single Out Of Here in 2016, with a new single on the way in February called In Time.

In a change of tradition, the pipe band will kick off proceeding at 2:00 pm in O'Connell Square while crowds wait for the parade to arrive.

The parade will assemble in the Youthreach car park at 1:00pm and will begin at 2:00pm. Local teams, clubs, community groups and bands will march in the parade on the day bringing the town to life.

It will be led by Portlaoise Accordion Band which will enter O'Connell Square at approximately 2.20 pm.

At this stage there will be an official flag raising ceremony and the national anthem will be sung by Rebecca Lane. This will be followed a performance from the local Men's Shed Choir.

There will also be performances from the band Noize and a closing performance from musician James O'Connor.

A live DJ will see out the evening and a raffle will take place on stage with some amazing prizes donated by local businesses.

Raffle tickets will be available at the stand or from our stewards on the day.

"We would like to thank all our amazing local businesses for your amazing support so far," Jason added.

No foul play in death of Mountmellick man.