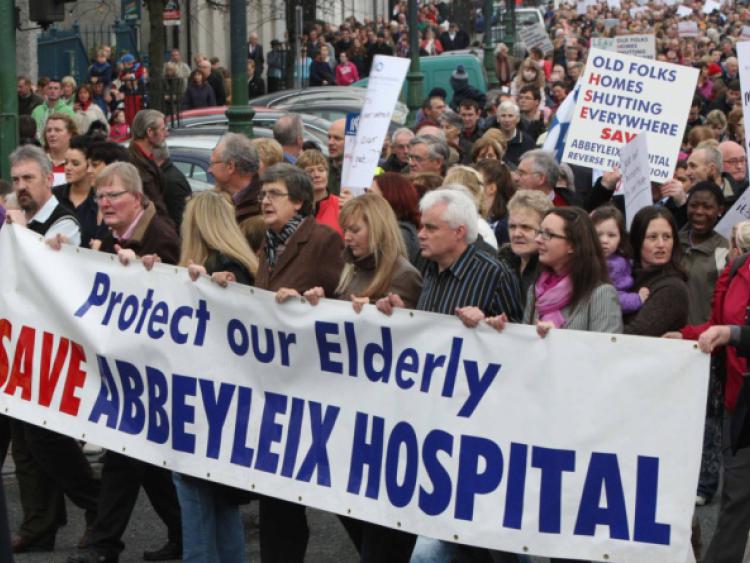 Part of a protest marches in Abbeyleix over the closure of the Abbeyleix District Hospital in 2011.Picture: Alf Harvey.

Essential and major upgrades to two Laois health facilities have received potentially big setbacks with confirmation that there is no money set aside to pay for the overhaul of two key step-down health care facilities in Laois, a Sinn Féin TD has claimed.

Deputy Brian Stanley made the claim after receiving a response to a question asked of the Minister for Health Simon Harris which said some money has been allocated for repairs and other work but no big projects.

“St Vincent’s Hospital Mountmellick and Abbeyleix hospital have been in desperate need of expansion and refurbishment for some time. I have raised this issue again with the outgoing Health Minister Simon Harris as there is nothing in the capital budget so far for either. This has been confirmed in the reply to the recent parliamentary question I posed," he said.

Dep Stanley set out what had been allocated.

"Just €28,000 is allocated for Mountmellick to cover the cost of roof repairs and fire safety works. In the case of Abbeyleix, some minor alterations were carried out internally to provide extra beds during the COVID emergency with funding of €110,000 is allocated for upgrade works on the roof.

"While any funding to improve the facilities is welcome, none of this will advance the major refurbishment and extension costs which are estimated at €10-€12 million for Abbeyleix, or the €23 million for the new building needed in Mountmellick to provide 130-bed capacity there.

"Both facilities...have been unjustly neglected by the successive government.  Governments have come and gone and many promises that were made have yet to bear fruit," he said.

Deputy Stanley insisted that the community nursing units are needed.

"There is an overwhelming demand for places in Mountmellick and Abbeyleix. This is down to the excellent level of care provided by staff in both hospitals.  During the COVID-19 emergency, they have exhibited exceptional dedication and skill.

"The population of Laois is increasing, with an expected sharp rise in the number of elderly over the next two decades. These factors and the increased demand for ‘step down’ beds to free up space in acute hospitals such as Portlaoise and Tullamore underline the need for more nursing home capacity. Laois has waited long enough and it is time for these plans for Mountmellick and Abbeyleix to be put to action by a new government,” he said.

The HSE decided in 2011 that it wanted to shut Abbeyleix and St Brigid's Hospital near Portlaoise. A legal challenge and public campaigns halted closure.

Abbeyleix has changed from being a residential facility to a main respite care facility. The HSE confirmed recently that it was investing in the hospital so that it could be used during the Covid-19 crisis to ease pressure on Portlaoise hospital.

An action committee has met with the HSE to discuss an expansion plan but no agreement has been reached.

As for Mountmellick, it is the main public step-down facility in Laois. In 2015 the health service watchdog HIQA banned admissions at the hospital. A year later, in 2016, when the ban was lifted, Laois TD and Minister Charlie Flanagan announced funding of €23.7 million for a 130-bed unit.

This unit was due to have been completed by 2021. The HSE applied in May this year to build phase 1, a 50-bed unit at a cost of around €11 million.

Part of the HIQA ban being lifted depended on the commitment to deliver the big overhaul of Mountmellick.