Petition underway for footpath from Mountmellick to The Rock 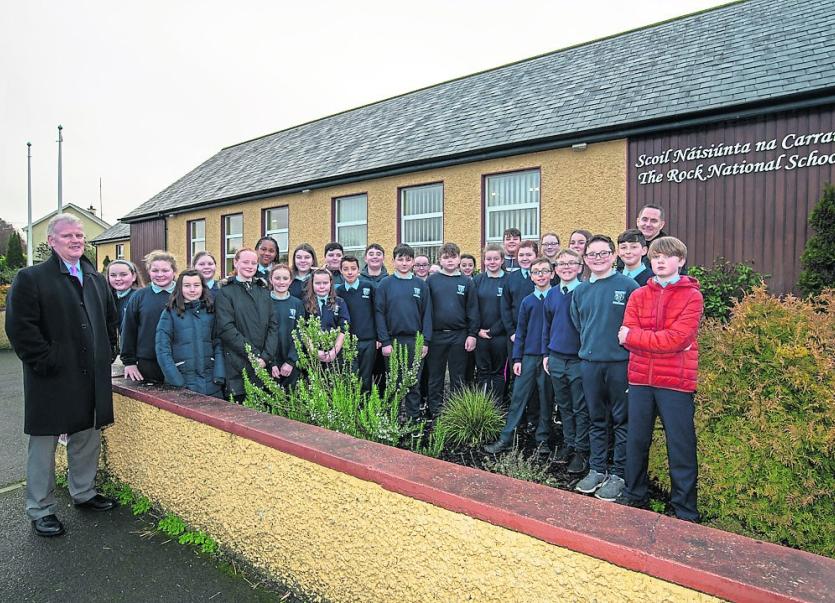 Sixth class from The Rock NS in 2019 who requested the path, with their teacher Mr Fennelly and Principal Liam Ahern Picture: Denis Byrne

Residents of a community near Mountmellick have joined with a 200 pupil primary school and GAA club to request a footpath from Laois County Council.

Just 300m of footpath is needed to complete a safe 2km walk from The Rock to Mountmellick, but no money has been found by the council to install it for the past two years.

In 2019 the Sixth class children in The Rock NS all wrote letters to county councillors asking for the footpath. At that time the council estimated that a proper path with lights and drainage would cost up to €250,000.

Mountmellick Cllr Paddy Bracken recently got an update from Laois County Council on the path.

This week The Rock resident Faith Quille started a petition, and it has almost 500 signatures.

She is asking for Mountmellick residents to support the call for the footpath.

"The ditch area between Debicot and the Rock GAA grounds is often overgrown and on a very hazardous corner of road which individuals including families with young children often have to travel.

"The students of the Rock school have written to Laois Co Co repeatedly for many years looking for this path extension but I believe that it isn't only Rock school students who need this path but also members of the general Rock community, Debicot residents as well as Mountmellick Town residents who frequently use the path to walk, cycle, jog and run.

"Joining the footpath between Debicot and the Rock GAA would allow people to travel safely from Mountmellick Town, without transport, all the way to the Rock GAA/Rock NS/Rock shop.

"This footpath extension would benefit people who wish to use this area for exercise in both directions but most of all young people and their families/friends who attend the Rock GAA club and the Rock NS.

"This is especially prominent with the current Covid 19 restrictions and the need for safe exercise areas within 5km of residential areas. The need also extends beyond current Covid 19 restrictions however as many people will continue to require safe family walking areas, a direct route to training/matches in the Rock GAA club and Rock NS students and families," Faith said.