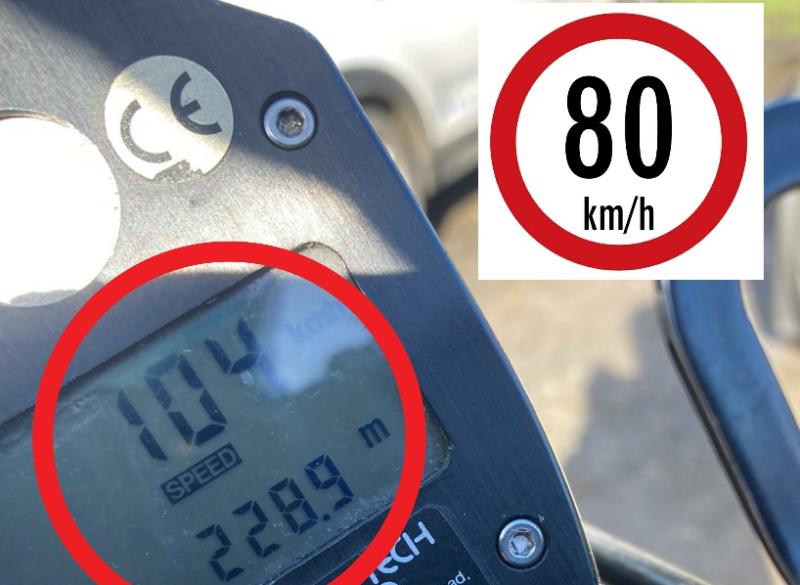 Motorists have been urged to slow down as gardai step up traffic enforcement on speeding drivers in the run up to the bank holiday.

Gardai have launched their 24 Hour National ‘Slow Down’ Enforcement Operation for October 21 and 22. This will involve:

Both the Garda Síochána and the Road Safety Authority (RSA) are urging motorists to reduce their speed and be mindful of vulnerable road users ahead of ‘Slow Down Day’, a national speed enforcement operation for a 24 hour period from 07.00hrs on Thursday 21 October to 07.00hrs on Friday 22 October 2021.

The aim of "Slow Down Day”, which is taking place in the run up to the October Bank Holiday weekend, is to remind drivers of the dangers of speeding, to increase compliance with speed limits and act as a deterrent to driving at excessive or inappropriate speed.

The overall objective is to reduce the number of speed related collisions, save lives and reduce injuries on our roads. International research has estimated that 30% of fatal collisions are the result of speeding or inappropriate speed.

Minister of State at the Department of Transport, Ms. Hildegarde Naughton said, "I am asking drivers to support National ‘Slow Down’ Day this week and every day by easing off on the accelerator. Slowing down saves lives and even small reductions in speed can help avoid a collision in the first place, and reduce the severity of a collision. I am also urging all road users to take extra care over the Bank Holiday Weekend as the clocks go back. With evenings getting darker earlier now it’s important to look out for each other and be seen when on the road.”

Speaking at the launch of ‘Slow Down Day’ and the October Bank Holiday appeal which took  place in Cork City, Superintendent Thomas Murphy, Garda National Roads Policing Bureau, An Garda Síochána said: "It is important to thank all of those drivers who do the right thing and drive not only within the necessary speed limits, but at speeds that are appropriate to the conditions.

"However, there are some drivers who ignore our speed limits and put themselves and others at risk. This is especially true on rural roads which are often narrow, and where bends and corners restrict a driver’s vision. There are no margins for error on these roads which is why drivers need to slow down when using them.

"We are asking all drivers to support our National ‘Slow Down’ Day not just on ‘Slow Down Day’ but every day. If we all slow down a little, we can make a big difference. A 1% reduction in average speed will bring about a 4% reduction in fatal collisions, and therefore reducing motorists’ speed is essential to improving road safety.”

Mr Sam Waide, CEO of the Road Safety Authority said: "A speed limit is there to keep road users safe, it is the maximum legal speed that a driver can travel on a given road type. However, it is not a target. You should always choose a speed that is appropriate to the conditions and your experience.

"By slowing down you give yourself time and space to react in an emergency. The faster you drive, the more likely you are to be involved in a collision which could result in death or serious injury. This is particularly true for vulnerable road users. If hit at 60km/h 9 out of 10 pedestrians will be killed. Hit at 30km/h 9 out of 10 will survive.”

Mr. Waide concluded, "With clocks going back this weekend, motorists also need to be mindful that the visibility of vulnerable road users on our roads will be reduced. Motorists need to take care and remember that they are sharing the road with pedestrians, cyclists and motorcyclists who can be difficult to see in poor lighting or in darkness. Cyclists and pedestrians can increase their visibility on the roads by wearing reflective clothing. In dark clothing, a pedestrian or cyclist is only likely to be visible 30 metres away, in low beam headlights. By wearing something reflective they become visible at 150 metres away, the length of a football pitch.”

Up to October 19, provisional figures show that there have been 113 people killed on Irish roads as a result of 102 fatal collisions.