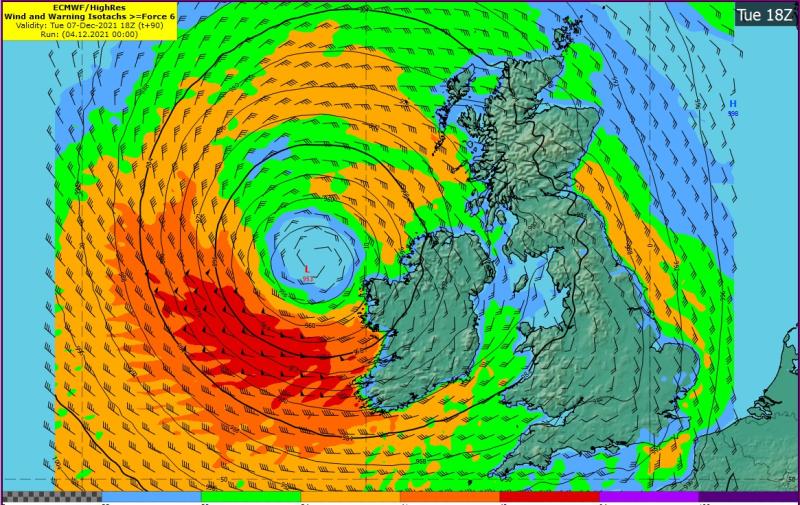 Storm Barra is "weather bomb" is heading for Ireland which could present a "danger to life", according to the country's top weather forecaster.

The Head of Forecasting at Met Éireann Evelyn Cusack has said that a Status Red weather warning has been issued for Kerry and Cork from tomorrow morning.

Speaking on RTÉ's News at One, she said that Storm Barra is currently forming in the middle of the Atlantic Ocean and what could be described as a "weather bomb" is heading our way.

She said there is "a danger to life", as well as a risk of snow and flooding, from Storm Barra over the next two days.

Speaking on RTÉ's Today with Claire Byrne, Ms Cusack said the local authorities and emergency services are preparing for multiple hazards brought about by "a significant and severe weather event" which will start before dawn tomorrow.

Status Red Weather Warnings have been issued for parts of Ireland by Met Eireann as Storm Barra bears down on on the courntry.

A Status Red Wind Warning has been issued for Cork and Kerry. It will be in place from 6am until 9pm on Tuesday., December 7. Southwesterly winds later veering northwesterly will reach mean speeds in excess of 80 km/h with severe or damaging gusts in excess of 130km/h. Due to a combination of high waves, storm surge and high tide, coastal flooding is expected and Met Erieann says disruption to power and travel are likely.

WATCH LIVE: Track Storm Barra as it bears down on Ireland

'#StormBarra is still forming. It's what the Americans would call a Weather Bomb'

The rest of the country is covered by a Status Yellow Weather Warning.