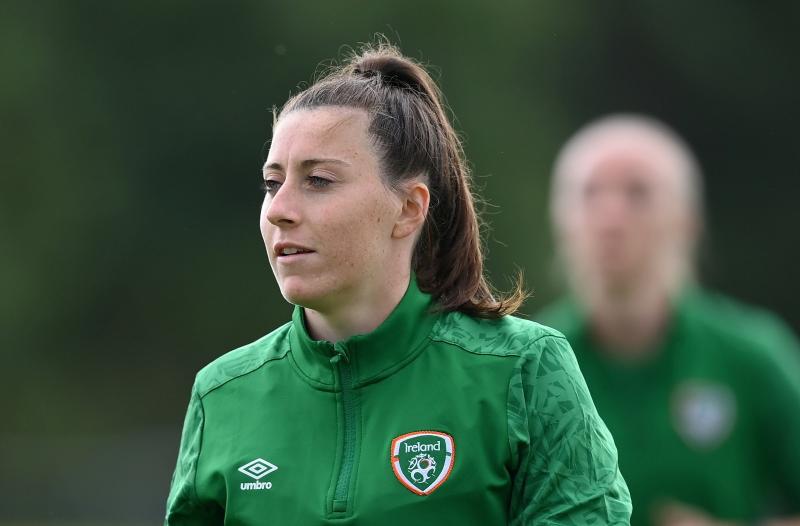 The Republic of Ireland Women's National Team will have a new striker available for selection against Australia, thanks to the delivery of an Irish passport for Lucy Quinn.

For the 27-year-old, it had been a long time in coming having initially started the process to become eligible to represent Ireland some years ago.

But now the Birmingham City forward has received the green light to be in contention for a place in manager Vera Pauw's team - just in time for next Tuesday's International Friendly against Australia at Tallaght Stadium.

Quinn, whose grandparents hail from County Sligo, is excited to pull on the Ireland jersey having spent time training with the squad this week at the FAI National Training Centre.

"This is massive for my family, I've wanted to do this for them for such a long time. To be involved in my first camp with Ireland is such a proud moment," said Quinn.

"I started the process to become eligible five years ago once I knew that I wanted to play for Ireland. It was always a goal in my mind the whole time, but there were issues with paperwork and Brexit and some other things. I think I put my Dad through a lot of stress collecting information that he was not aware of, in terms of family history, so this is a massive thank you to him," she said.

Quinn, who has also played for Portsmouth, Yeovil Town and Tottenham Hotspur, says that she always had a green shirt on growing up and was fully aware of her Irish roots.

There was no escaping the Irish connection once she joined Birmingham this year with Marie Hourihan, Harriet Scott, Louise Quinn, Jamie Finn, Eleanor Ryan-Doyle and Emily Whelan now all club-mates.