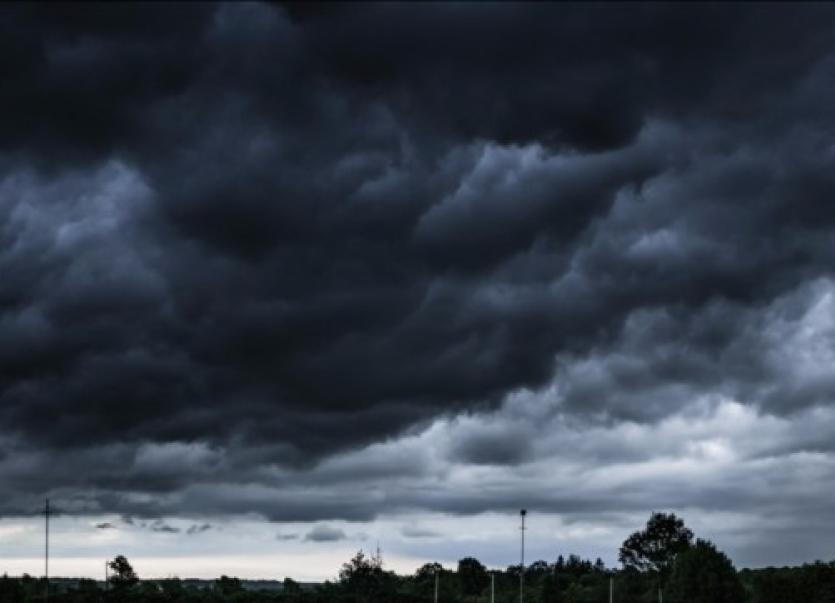 Met Éireann has issued a Status Yellow rain warning for Kildare, Leinster and three other counties with thunderstorms due to thrash the eastern half of Ireland with a risk of flooding on the cards.

The forecaster's alert for heavy showers and isolated thunderstorms covers 15 counties and is valid to 10pm on Monday night, July 12.

The counties covered by the alert are Carlow, Dublin, Kildare, Kilkenny, Laois, Longford, Louth, Meath, Offaly, Westmeath, Wexford and Wicklow. Outside these Leinster counties Tipperary, Cavan and Monaghan are also due to be hit.

The forecaster says the heavy showers over the eastern half of the country will die away early Monday night.

The forecaster says it will be warm with daytime temperatures increasing through the week along with mild nights. Conditions will feel muggy but there is better weather promised later in the week.

Heavy showers and isolated thunderstorms with a risk of localised flooding.

NATIONAL FORECAST issued at 10.27am on Monday, July12.

MONDAY: Cloud continuing to break up this morning, with patchy drizzle in the east easing. Sunny spells and scattered showers developing through the afternoon, turning heavy at times over the eastern half of the country, bringing risks of isolated thunderstorms and spot flooding. Highest temperatures of 18 to 21 degrees in a light to moderate northerly or variable breeze.

Heavy showers over the eastern half of the country tonight will die away early in the night, becoming dry apart from just isolated showers. Clear spells too, though cloud will increase from the west during the night. Lowest temperatures of 10 to 14 degrees. Mist and fog patches will form in light to moderate northwesterly breezes.

TUESDAY: A dry day for most though patchy drizzle will affect northern and western coastal counties at times, occasionally developing further east. Mostly cloudy to start with the best of the sunny spells in the south and east, but becoming more widespread through the day. Highest temperatures of 17 to 21 degrees generally, reaching 22 or 23 degrees in parts of the south and east, in light to moderate northwesterly breezes.

A dry start with clear spells but patchy drizzle will again move in from the Atlantic during the night along with thickening cloud. Lowest temperatures of 10 to 14 degrees in light westerly or variable breezes, with mist and fog patches forming.

Wednesday: A mix of cloud and sunny spells morning but becoming predominately cloudy through the day. Patchy drizzle will continue to affect northern and western coastal counties at times but holding dry elsewhere. Highest temperatures of 18 to 23 degrees generally, but a degree or two cooler in Atlantic coastal counties where it stay mostly cloudy, with light to moderate westerly winds.

Thursday: A warm day with most areas staying dry with sunny spells developing in the afternoon. Patchy drizzle will continue along Atlantic coasts and over Ulster. Highest temperatures of 18 to 23 degrees, coolest in Atlantic coastal counties and warmest in the south and southeast. Light to moderate northwesterly breezes will ease mainly light variable overnight allowing for mist and coastal fog to develop. Dry with clear spells and lowest temperatures of 13 to 16 degrees over Leinster and east Munster, 10 to 14 degrees elsewhere.

Friday: Another warm day with sunny spells though cloud will bubble up in the afternoon and drizzle will mainly affect coastal areas. Highest temperatures of 20 to 25 degrees, warmest in the southwest, in light variable breezes.

Weekend: Current indications suggest that it will be very warm with highest temperatures will widely be in the mid-twenties. Largely dry too with some good sunny spells though patches of drizzle will still occur.