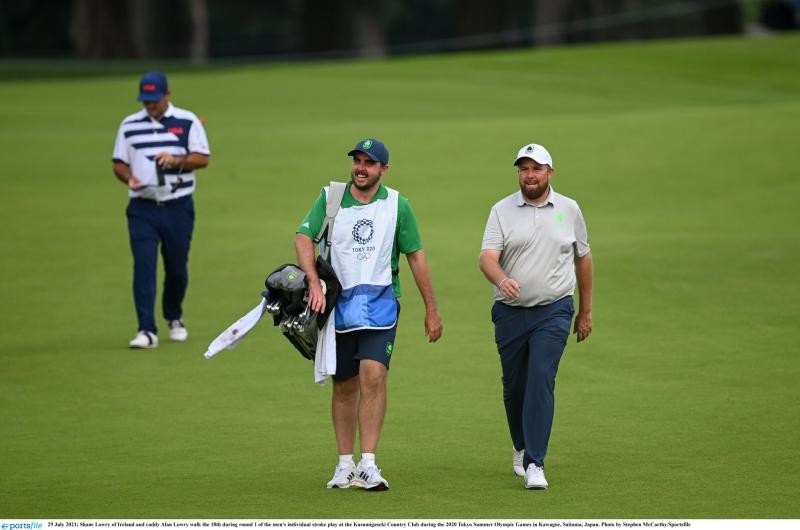 Offaly's Shane Lowry along with brother and Caddy, Alan, have soared into contention for an Olympic medal

Today was the second day of play at Kasumigaseki County Club at Tokyo 2020 for the Men’s Individual Stroke Play. Now at the halfway stage, both Shane Lowry and Rory McIlroy have soared into contention, with a round of 65 for Lowry and 66 for McIlroy.

Overnight, the pair sat in tied 31st and tied 20th place respectively and were determined to make a move towards the medal positions, which will be awarded following the final round on Sunday. With some play from Round Two still to finish tomorrow – with play suspended this evening due to weather conditions - the Team Ireland duo are currently tied for 7th and right into the mix heading into the weekend.

“Golf’s a funny game,” Lowry reflected afterwards. “I started off lovely and just sort of had that momentum for the whole day then. Especially when I came out after the delay. I holed a lovely putt on 13, an eight or nine-footer, and then from there, I just played lovely for the rest of the day. I actually missed a short one on 17, which would have been nice to hole, but I’m happy with my score and very happy that I have a chance to do something special over the weekend.”

“Same thing, stay patient and try and make as many birdies as I can. The worst thing you can do is go out there and be really aggressive and make silly mistakes because at the end of the day, we’re only playing for 1st, 2nd and 3rd this week and that’s what it’s all about."

“I just want to get off to a good start tomorrow, shoot a good score and get in the mix for Sunday. That’s what I’ve been wanting since The Open has finished. My full mindset has been just about putting my head down and trying to get myself into contention on Sunday of the Olympics – that even seems weird to say that! Hopefully that happens.”

Xander Schauffele (USA) set the pace on 11-under with Mexico’s Carlos Ortiz, Chile’s Mito Periera, Alex Noren of Sweden and Austria’s Sepp Straka also within touching distance of those illusive medal positions. As for Lowry, the plan is more of the same for the final two rounds.

“It felt good, it didn’t feel much different to yesterday,” said McIlroy, who opened with a round of 69. “I felt like I played well yesterday, I just didn’t score as good as I could have and I think that’s why I came off the course maybe not as disappointed as I would have been because I knew that the good golf was in there and it was nice to see some of that good golf today.”

Ranked 13th in the Official World Golf Rankings, McIlroy drove the green on the 294-yard par 4 6th, before sending his eagle attempt 15 feet by. Holing the return effort, it was the start of a nice run which saw him make the turn on 6-under par.

“It was a momentum starter, I three-putted that green yesterday so I was sort of thinking of that as well,” he laughed. “It was nice to hole that one coming back and it certainly gave me some momentum going to the 7th, that tee shot there was good and the eagle on the 8th was great. There are a few holes here that the length off the tee is an advantage and that is one of them.”

Once again weather played a factor and play was suspended due to lightning at 3.57am Irish time. Play resumed at 6.20am, and neither McIlroy’s nor Lowry’s momentum was dampened as they both carded birdies on the restart.

Play was suspended for a second time at 09.30am (Irish time), and will not be resumed this evening, so the Irish pairing will have to wait until tomorrow morning for the third round draw.