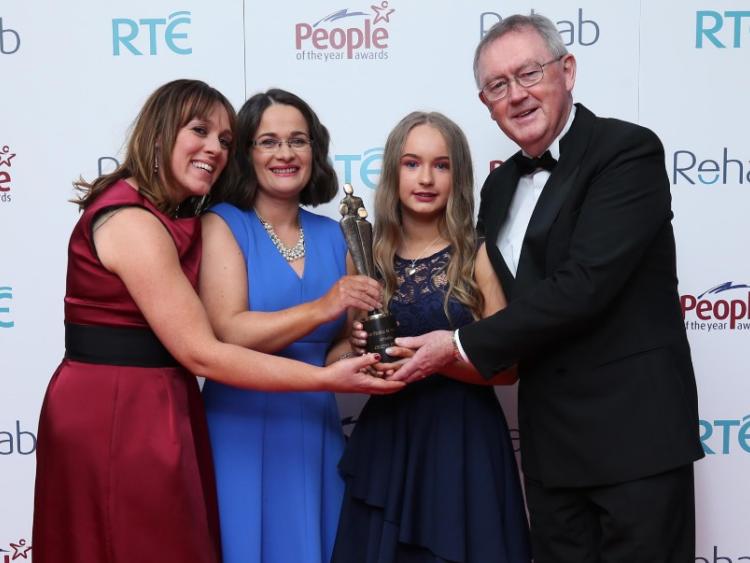 RTÉ Radio One broadcasters Evelyn O’Rourke (left) and Sean O’Rourke (right) present Colette Byrne and her daughter, Kate, with the Everyday Hero Award at the 43rd Rehab People of the Year Awards 2018

Laois woman, Colette Byrne, has been honoured with a top accolade People of the Year Awards 2018.

The Ballinakill native, was presented with the Everyday Hero Award by RTÉ Radio One broadcasters Sean O’Rourke and Evelyn O’Rourke for selflessly founding an online community – widow.ie – following the tragic death of her husband.

The website has supported hundreds of people in similar circumstances through their most difficult and darkest time. The Awards were broadcast live on RTÉ One from Dublin’s Mansion House on Sunday.

Colette’s husband Peter was tragically killed in a traffic accident in August 2008, leaving her to rear three-year-old Kate (now 12). Colette’s first Christmas was spent both grieving for Peter and learning how to set up a website.

Adjusting to life without a partner is a slow and difficult process, and most people do not really understand what a bereaved person is feeling, unless they have experienced a similar loss.

After joining www.widow.ie, people soon discover they are not alone. They learn of others who are going through a similar loss and can share experiences and offer, or receive, mutual support.

For Colette Byrne, the driving force behind the website was the need to have specific support addressing the needs of people in Ireland.

“From the start I realised how horrible widowhood is. Before Peter’s death, I was ignorant to the many difficulties faced by being widowed. It was only when, in the depths of grief and after discovering an American widow support website, did I realise the benefit of an online support forum.

“The American forum I had joined, although great support, was missing something for me personally. I soon realised it was the fact that even though grief is a universal language, many aspects are local.

"For example, an inquest – I wished to hear from others who had been to one here in Ireland. But I was on an American support forum and the members there wouldn’t know much about the Irish system.

“The seed was planted. Even when I look back now, it is amazing how everything just came together. Don’t get me wrong, it was difficult with many a sleepless night trying to better understand how to code and build a website from scratch. Yes, there were tears, and with grief I found it difficult to concentrate for long periods, but persistence won and Widow.ie soon opened," she said.

Ireland’s longest-running and most prestigious awards event, the People of the Year Awards are widely recognised as one of Ireland’s highest accolades.

Nominated by members of the public, and finalised by a panel of adjudicators, a total of ten awards were presented at the ceremony which was hosted by Gráinne Seoige and Aidan Power.

“We have services throughout Ireland that support thousands of people with disabilities. Every day our teams in communities across the country meet people who are also doing great work, but they do not seek the limelight or get the recognition they deserve.

"The Awards serve to highlight all that is good about Ireland and honours those whose courage, resolve and bravery is boundless," she said.