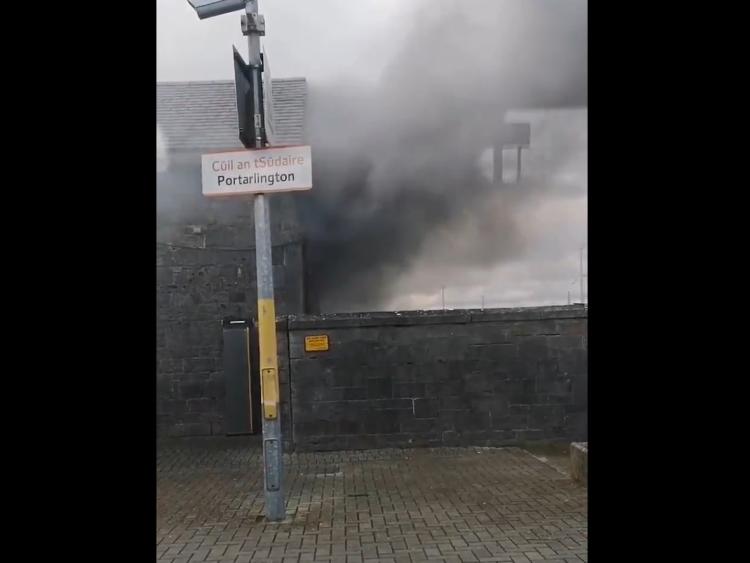 Laois County Fire & Rescue Service has confirmed that Portarlington Train Station remains closed after a fire broke out this afternoon.

The train station was evacuated around 4pm today Tuesday March 19, after a fire began in a maintenance workshop, a stone building that runs next to the platform.

Commuters from Dublin and Cork and Limerick will be disrupted by the fire because the station is expected to remain closed to passengers for several more hours.

Fire brigades from four stations are attending the blaze which is understood to now be under control. The roof of the workshop has been destroyed.

The fire began in a maintenance carriage which is not for passengers, inside the workshop . Nobody was working on the carriage at the time but ambulances were called to the scene as a precaution, a spokesperson for the fire service told the Leinster Express.

"There were no injuries. The ambulances are on the scene as a precaution," the Fire Service spokesperson said.

Fire brigades from Portarlington, Portlaoise, Mountmellick and Monasterevin are attending the fire.

"Members of the public were evacuated and the station is currently closed. It will remain closed for a few more hours," the spokesperson confirmed.

Passing train passenger Aine Mulloy tweeted the following video as the blaze was getting underway.

That's a lot of smoke....hope everyone is OK. Our train still smells of smoke jury from stopping #portarlington pic.twitter.com/ehvLZ2DqAR