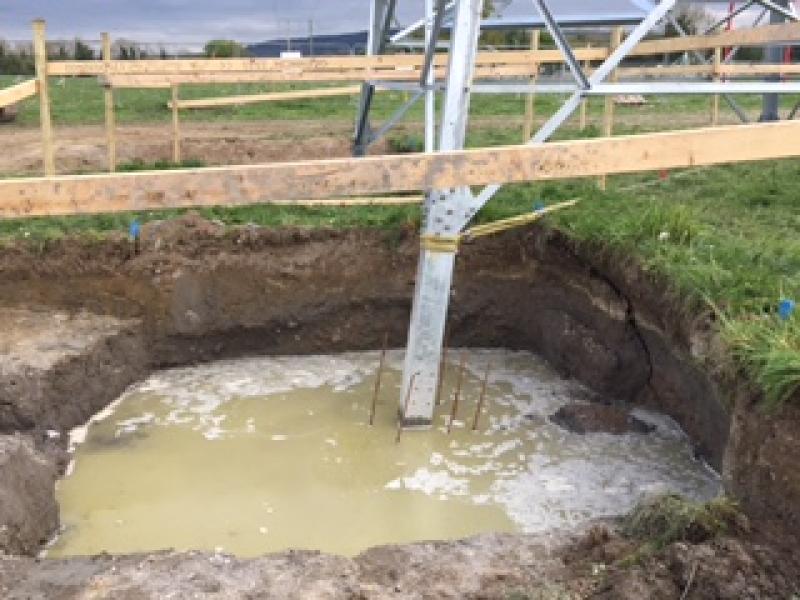 Work carried out at the Coolnabacca site in 2017 without permission involed the erection of some pylons - Pic: RTS Action Group

Residents opposed to the big electricity substation planned by ESB have expressed their dismay at the advancement of a study into the risk to the water supply for some 10,000 people in Laois.

The Ratheniska Timahoe Spink Action (RTS) Group has insisted that the project poses a big risk to the underground water supply upon which many Laois people depend. They also contend that they were promised that they would be consulted if a safety study was commissioned.

“We in RTS group and our local community are shocked at the latest developments in the Laois-Kilkenny reinforcement project.

“Irish Rural Link on behalf of ESB/Eirgrid have ploughed ahead and commissioned a Hydrogeological and Hydrological Report on the site of the proposed substation at Coolnabacky in a bid to force through a process and fully ignore our community.

“Agreements were made between RTS, the CEOs of both Eirgrid and ESB and our three TDs in a meeting held in the (then) Minister for Justice's office (Charlie Flanagan TD) in January 2020,” the said.

The RTS Group set out the commitments made in a statement to the Leinster Express.

1. There would be no progress with the project until the future plans for the substation were shown clearly to RTS and our community. Eirgrid/ESB have refused to supply this information.

2. If we got to the stage within the participation process of a Hydraecological and Hydrological report being completed, it would have to be done by an independent company agreed by RTS on behalf of our local community and at the suggestion of our TDs this company would have to be from outside of Ireland to be truly independent. Irish Rural Link employed a company from Carlow without any consultation.

3. The scope of any such reports were to be agreed between the parties concerned. At a minimum, this report would have to be a full site investigation rather than a desktop study of the information supplied to an Bord Pleanala which has no mention of the number of people who depend on this highly important water source and also the staggering tonnage of oil we now know will be stored on site making this facility a clear and present danger to the future of our water supply.

The residents, who have opposed the project for a decade, believe that the State-owened electricity provider is behaving as it has always done during the dispute development.

“The behaviour of ESB/Eirgrid in getting Irish Rural Link to organise this report clearly shows that nothing has changed in the manner in which they have treated our community for the last 11 years.

“We will not be walked over; we will not be bullied, and serious questions must now be asked of the behaviour of Irish Rural Link.

“Both Eirgrid/ESB and Irish Rural Link should take note that the community's resolve to make sure this project doesn't proceed is as strong as ever, our area will be destroyed for generations to come, we simply cannot allow that to happen,” said the statement.

The RTS group has already warned that the substation will be a “giant socket, the hub for connection”.