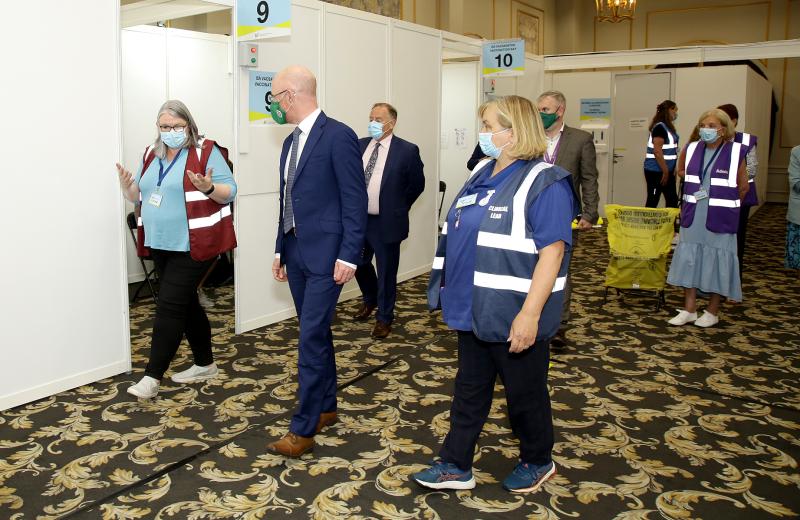 Nearly half of those vaccinated against Covid-19 in Laois on at a free August Bank Holiday Monday clinic in Portlaoise availed of the the walk-in option as queues formed outside the Laois facility, according to the HSE.

Figures provided to the Leinster Express by the HSE on August 2 showed that more than 400 people were vaccinated at HSE Centre in the Midlands Park Hotel in Portlaoise by 1pm today.

This included 170 walk-ins who had availed of the walk-in option at the centre which was due to open between 9 am and 1pm on Monday.

The HSE also reported that people were still queueing outside at 1pm with just 60 minutes to go before the centre closed. There have been previous queues at the centre but that was before the walk-in vaccination was possible.

The hub was just one of three centres to facilitate walk-ins last Thursday. Several centres around Ireland have subsequently welcomed people without appointments.

The next HSE Covid vaccination walk-in clinic in Portlaoise takes place on Thursday, August 5 from 9am to 5pm.

July was the busiest month for the Laois vaccination centre which passed the 50,000 milestone on Friday July 23. The HSE reported that 18,737 doses were given in Portlaoise between July 1 and 26.

In the early months of the centre's operation, most jabs were being administered by GPs in their own surgeries to the at risk older groups.

Vaccination in Laois has surged alongside a slide back down the Covid-19 containment table for Laois. Infections in the county spiking again on the back of the Delta wave in July.