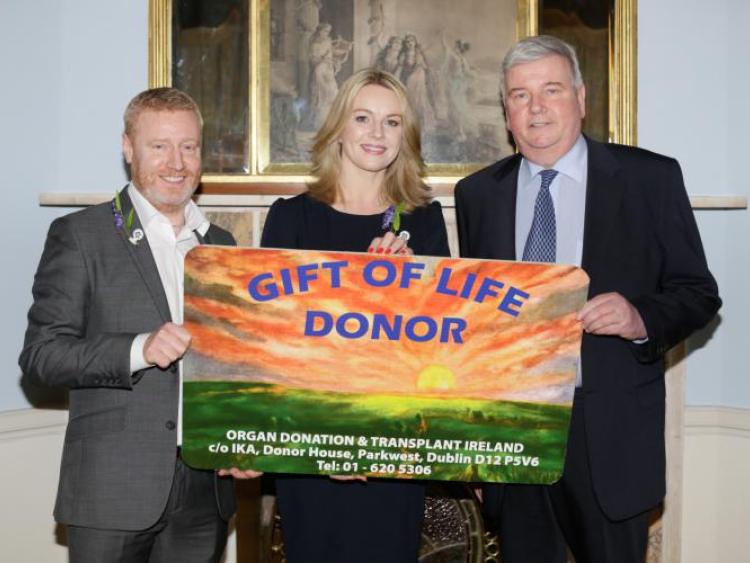 A Laois man told his incredible health story at the Mansion House, Dublin for national launch of Organ Donor Awareness Week on Tuesday.

Val Kennedy shared his own lung transplant story that resulted in the keen golfer receiving the ultimate gift of life.

In April of 2015, life was normal for Val and he was delighted to have won a golf competition at his local Tullamore Golf Club. However, he could not have predicted that just four days later he would suffer a dramatic health decline.

Although in the initial stages it was thought Val’s heart was under attack, further tests and scans revealed that he had an irreversible lung condition called Idiopathic Pulmonary Fibrosis (IPF).

He was told his only hope of survival was a lung transplant. Val was disappointed when on two occasions, in December 2015 and February 2016, when he was called to the Mater Hospital for a lung transplant but the transplant operations did not proceed as donor lungs were incompatible.

It was third time lucky when he received his life saving transplant in March 2016, eleven months after first becoming ill.

Val (63), originally from the Clonminch Road in Tullamore, Co Offaly and now living at Railway Mews in Portarlington, Co Laois asserted, “my donor has saved my life for which I will always remain indebted."

“When I became ill, my health had declined rapidly over a short space of time and I spent a great deal of the eleven months prior to my transplant in hospital.

“My diagnosis came as a great shock to me but also to my partner Patricia Conroy, who has been my rock throughout my illness.

"Her only son died under tragic circumstances some years previously and now she had to face losing me also. But she came around and only for her love and support I don’t know if I could have carried on.

“In the times when I was allowed to return home from hospital I could barely exist and was dependant on two oxygen machines to keep me alive.

"Patricia and my two daughters, Sarah and Lisa, who are both nurses provided huge comfort, support and encouragement to me as I battled through my health crisis.

"Patricia helped me exercise as a way of staying strong enough to undergo a transplant and she literally linked my arm every day to support me as I tried to move around carrying a cylinder of oxygen on my back.

"I would like to thank Professor Egan, Transplant Surgeon David Healy and the wonderful team at the Mater Hospital who took such care of me for months before my transplant and the team who helped me on the road to recovery following my transplant and who are still supporting and caring for me.

“I was allowed to send a letter anonymously through the transplant coordinator at the Mater Hospital to my deceased lung donor’s family, his wife, to express my sincere gratitude. Her selfless decision to donate her husband’s organs has left a profound legacy for me and my family," he said.

Val expressed his joy at living to see his grandchildren.

“Months after my diagnosis my daughter Sarah announced she was pregnant. I was overcome with emotion at the prospect that I would not live to see my first grandchild Sadie being born.

"Happily I now have the double privilege of being the proud grandfather of two grandchildren as my other daughter, Lisa, has given birth to a baby boy, Adam, and this wonderful privilege will soon be quadrupled as Sarah is expecting twins in a few months time," he said.

Ahead of Organ Donor Awareness Week, which runs from March 31 to April 7, Val wants to urge families to have ‘the talk’.

“People need to have the talk with their families. If you want to be a donor, telling your family is as important as having the donor card because then if anything did happen it takes the onus off the family when making the decision,” he said.

While making his way to the national launch of Organ Donor Awareness Week on Tuesday morning, March 27, Val said he was in brilliant form.

On St. Patrick’s Day 2018 Val attended a special reception at Áras an Uachtaráin which was held to acknowledge those who support organ donation, and pay tribute to donors, their families and all medical personnel involved in transplant operations.

“It was a joy to be at, I got to meet President Michael D. Higgins individually. I was there with members of the Idiopathic Pulmonary Fibrosis group,” he said.

Val is a member of the Portarlington Men’s Shed and Portarlington Lions Club and he told the Leinster Express “the days are not long enough!"

The key message on Organ Donor Awareness Week is to ask families to talk to each other about organ donation and keep the reminders of their willingness to donate visible by carrying the organ donor card and permitting Code 115 to be included on their driver’s license.

Throughout the Week March 31 to April 7, the Association’s volunteers will be out on the streets, and in shopping centres throughout the country, distributing organ donor cards while selling 'forget-me-not-flower' emblems, brooches, lapel pins, pens and shopping trolley discs. All proceeds will go towards the Irish Kidney Association’s aid for patients on dialysis and those patients fortunate enough to have received a kidney transplant.

Organ Donor Cards can also be obtained by phoning the Irish Kidney Association tel. 01 6205306 or Free text the word DONOR to 50050. Visit their website here.