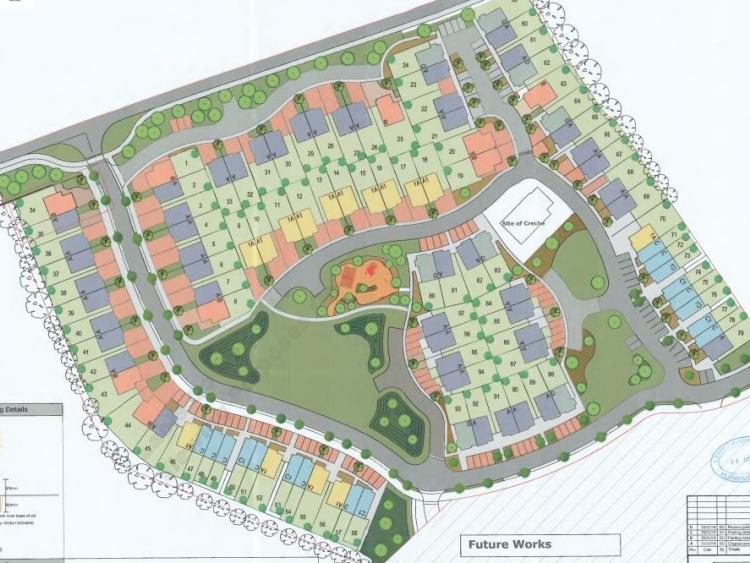 The plan for 97 house Bishopswood estate in Portarlington

A proposed new housing estate in Portarlington on the Laois Offaly border has drawn objections to the application by local residents.
Residents claim that the site is partly a swamp with protected frogs, and it could become another ghost estate.
An application to build 97 two storey houses by Kevin O’Rourke is lodged with Laois County Council.
The estate is planned in Droughill, off the Edenderry road. It has 63 three bed semi-detached houses, nine four bed houses, 17 two bed terrace houses and eight three bedroom houses with a new entrance from Bishops Wood road.
Outline planning approval is also sought for a creche.
Six submissions were lodged against the development. Among them, Avril and Cathal Ryan from Droughill say they strongly object.
“On the Bishopswood road side there is a swamp. Water lies in this field all year round and especially in winter and springtime. Millions of tadpoles inhabit this swamp region, the common frog is protected in Ireland,” Mr Ryan said.
He fears that extra traffic will be a danger to drivers and pedestrians and predicts anti social behaviour.
“There are very few job opportunities for young people in Portarlington. While there may be a housing crisis there sure isn’t one in Portarlington as planning permission has already been granted for numerous other housing developments here within the town. Are we going back to the Celtic Tiger with ‘ghost estates again?” he said.
Anne and Camillus Mannion live on Bishops Wood Road.
“This site is on a seriously deficient road which requires improvements along its length and at its junction at Spa Bridge and Bog Road. At peak hours the volume of traffic is already compromising road safety,” they claim.
“There are over 100 houses being built on the Edenderry road. Adding another 97 houses will cause chaos on this junction,” the couple said.
They fear that the higher density houses will depreciate house values, commuters will add greenhouse gas, and their houses will be overlooked.
Sylvia and Cormac Horan say a lack of jobs and proliferation of pubs, chippers and bookmakers in Portarlington “turns this town into an outer part of Dublin and little Dublin, ie Kildare”.
They say the site entrance will bring “200 cars coming and going at all hours” and describe it as a grave intrusion on their privacy. They note that existing houses are bungalows.
“The road barely allows two cars to pass safely… there have been a number of accidents at the junction to Marian Hill and the bog road. Spa Street is literally only a one way with no safe crossing,” they said.
“The land is home to migratory birds, rabbits, foxes, badgers and amphibious life,” the couple say.
“The rail system is bursting and people complain of having to stand on trains. The schools are already bursting. A growth in population will put a strain on doctors,” they say.
“By allowing such developments will be putting fuel on a fire that won’t be quenched,” the couple said.
A planning decision is due by Monday September 23.