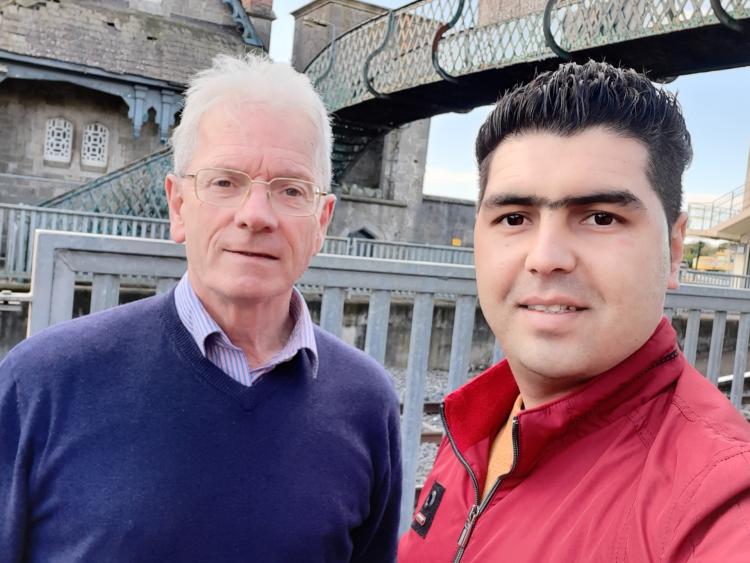 Portarlington Sinn Féin councillor Aidan Mullins is calling for urgent aid for asylum seeker Sayad Farid Sanai by the Irish government.
“Farid's story is so easily verifiable just by googling him as he is so high profile and he has all his documents with him,” he said.

Farid is a television news anchor who had to flee his country in October after several attempts by the Taliban to kill him. He is now staying in a Direct Provision Centre in Portarlington waiting for his asylum application to be processed in Ireland.

“I hope he is not left languishing in direct provision for two or three years when so little effort is need to resolve this. He can never go back to Afghanistan because he is high profile,” Cllr Mullins said.

Below: Farid at his newsdesk for Khurshid TV. He praised the community of Portarlington who welcomed the new residents of the East End Hotel, now a temporary direct provision centre.
“The reaction is generally very welcoming. The rugby and the soccer club went to meet them and invite them to play. The Laois Africa Support group organised a day of welcome and the local schools and community all came to meet them. The tidy towns has welcomed them too,” he said.

There are now about 70 men in the hotel, many sleeping in makeshift dorms in the dance hall. They are placed there until space is available in a Direct Provision Centre where they will again wait for the government to process their asylum applications.

“These men are looking to integrate. They are happy that they are safe and warm with food but they are sitting in cramped spaces all day with nothing to do and no liaison officer. Farid shows the human side. Some others may not be genuine asylum cases I don’t know. But the answer is to put more resources into processing their applications,” he said.

Cllr Mullins said there are some negative local reactions.
“You get some online trolls but you have to ignore them. People will say ‘what about our homeless’ but I don’t equate the two. If there wasn’t one refugee asylum seeker we would still have homeless people. Accommodating these people is not putting people out of homes. There has been a 50% increase in asylum seekers coming to Ireland and the state has a responsibility under international law to look after them,” he said.