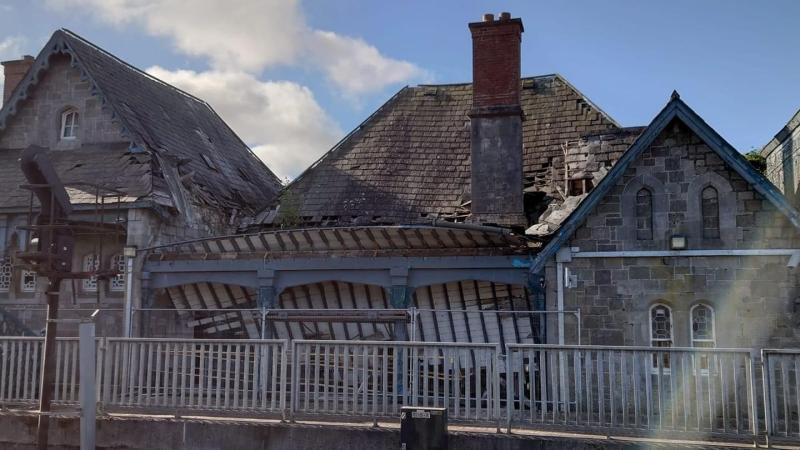 Irish Rail is set to spend big money on upgrading the first-class carriages on its trains while historic buildings at one of its busiest train stations in Laois that is crumbling into ruins.

The decrepit state of Portarlington's train station has been highlighted on the same day as the company which owns the property invited firms to bid for the contract to upgrade first-class on its services.

Senator Fiona O'Loughlin raised the concern over what she described as the 'shocking disrepair' of the railway building at the station in the Laois Offaly border town.

She said there is growing outrage after a photograph of the current state of the building was posted on facebook. The picture shows that the building is falling in on itself. She said it is surrounded by a wire fence which seems to be the only safety measures taken.

“It is shocking to see such a beautiful building be let go to rack and ruin,” said Senator Fiona O’Loughlin. “Not to mention from a health and safety aspect the building does not look like it will stand up on its own much longer.”

The Fianna Fáil representative said the building is on the far side of the railway and has not been used for some time. She said the station was built in 1850 in the typical Victorian style adding that an intricate latticework footbridge crosses above the railway line.

Irish Rail spent substantially on Portarlington in recent years through the expansion of the car park and lengthening of the platform.

Sen O’Loughlin is calling on Irish Rail to repair the building as a matter of urgency.

“Portarlington is well known far and wide for it’s station and this deserves to be repaired and kept as a historical monument to the town,” she said.

The former South Kildare TD issued a statement as Irish Rail invited companies to bid for a contract as part of its 'Interior Refurbishment Programme' on its first-class carriages.