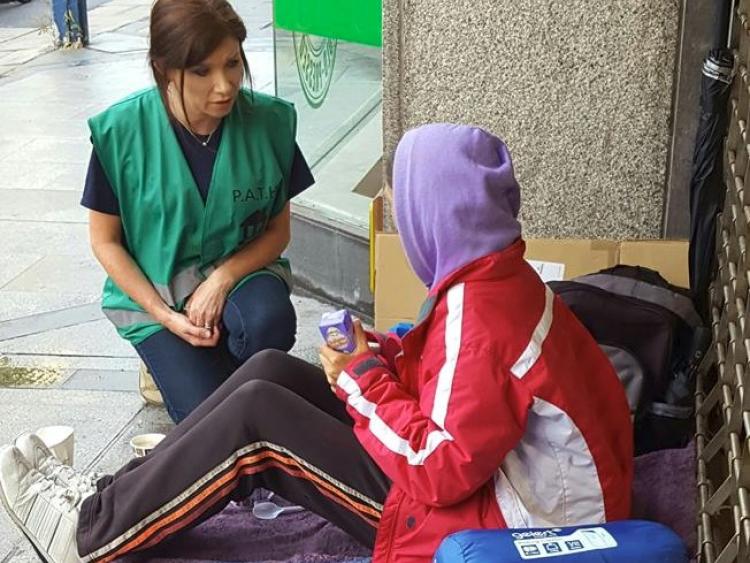 PATH volunteer on the streets of Dublin

A Laois charity that helps Dublin's homeless faced unprecedented demand in August from people sleeping rough on the streets of the country's capital city.

Volunteers from Portlaoise Action to Homelessness (PATH) travel regularly to Dublin with food for the people on the streets. While the capital was thronged with tourists from across the globe, the Laois charity was overwhelmed by the demand.

"Never have we seen the streets so busy," said the charity on its Facebook page on August 19.

"Even though tonight we had loads of extra buns,cakes and sweets , we got completely cleaned out in record time," said the post.

Just over 10 days later on August 27 the situation had eased slightly.

"Another night complete feeding our homeless friends living/sleeping on the streets of Dublin.Thankfully tonight was a little quieter than last week when it was extremely busier than our usual nights, but still coming home empty handed," said the post.

The group reported that a lot of people sharing there stories with us as to how they ended up in this situation.

"One lady told us how she tragically lost her daughter to suicide. Another man told us how he was trying to stay clean so he could see his daughter again. Our team of mostly ladies tonight commented on how many young girls and older men they encountered on there rounds tonight," said the post

The volunteers came across someone who had overcome homelessness on their August 19 visit.

"We heard a very encouraging story from a gentleman who has got himself back on the straight and narrow and turned his life around , got himself a job and a place to stay with the help of one of the national groups who help homeless people.

"He looked remarkable and would easily blend in with all the shoppers and revellers on the streets. He reminded us of the times we helped him out, not about the food we gave him, but the likes of the toothpaste and toothbrush helped him keep a bit of his dignity.We wish him the best of luck in the future and he gives hope to others," he said.

Electric Picnic campers can help. To find out how click here