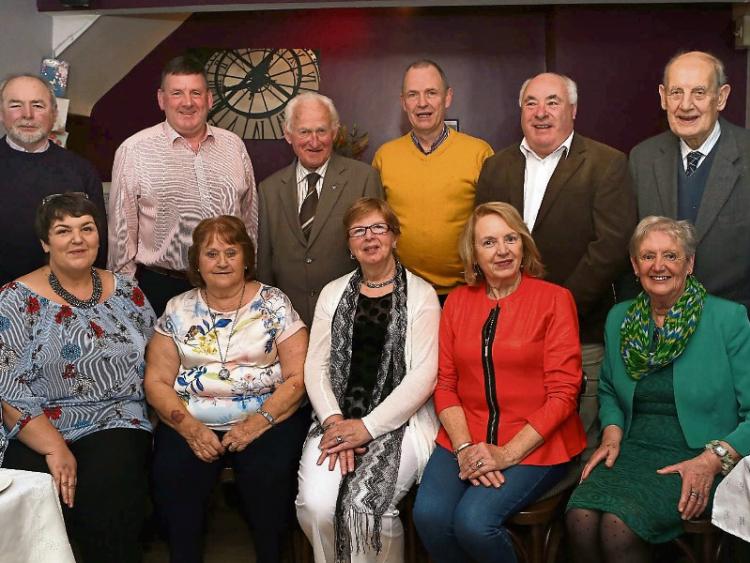 The committee of Portarlington Swimming Pool Association recently marked the handing over of the weekly Bingo sessions to Portarlington GAA and celebrated 47 years of successful running of the fund-raising game.

During those years the Association contributed £16,000 of the £62,000 cost of building the Swimming Pool in 1974 and over €230,000 towards the €7,000,000 cost of the present Leisure Centre. The Association also spent the equivalent in today’s money of over €200,000 on repairs and replacement of equipment as well as building a porch and a storage area and retiling the changing rooms and always keeping the building painted and in good shape. For a few years the Association joined forces with the Community Centre Committee and this joint venture raised over £50,000 towards the building of the Community Centre. During those years the equivalent of €4 million was paid out in prizes.

The first bingo session was held outdoors in the Mill Field in August 1969. The next session was held in a marquee on the Lea Road during a dancing festival in July 1970. When the festival was over it moved to the Catholic Club Hall. Over the next 17 or 18 years, due to venues becoming unavailable or unsuitable bingo moved to the East End Hotel, the Savoy Cinema and the Thatch in Killenard before finally moving to the Portarlington GAA Centre about 27 years ago. Thanks to the Trojan work of the late Paddy Burbage, who was the driving force for over 30 years, no Tuesday night was missed in all those changes. The only times bingo wasn’t held were a few weeks during a foot and mouth scare and a few nights during extreme weather conditions. Even on one occasion when the heating system broke down in the dead of winter it moved to Coláiste Íosagáin.

The organisers were very lucky in their stewards and in their callers. A few times it looked as if there could be a problem when a caller left but someone always turned up and a high standard of calling was maintained through all the years. A dedicated group of committee members attended every week and got on with all the tasks that are necessary for a successful fund-raising effort. The committee members are very grateful to the faithful supporters who kept coming every Tuesday night, some of them for well over forty years.

As the Chairperson, Barbara Askin, reminded the members and as we would like to inform the public the fact that they are no longer running bingo doesn’t mean they are winding up the Association. There is still plenty work to be done, to ensure a local voice in the running of the fine leisure centre the town now has and to promote swimming and other water sports and fitness. New members are welcome to join the Association although they cannot be offered any benefits of membership except the satisfaction of knowing that they will be part of a proud tradition of community service.

The history of Portarlington Swimming Pool and now Portarlington Community Centre is a good example of a successful partnership between Laois County Council, who own the Centre and an active local committee who always did whatever was necessary in the interest of promoting swimming and a healthy community. There is still a job to be done and plenty work for anyone who would like to give a hand.