No progress by council to redevelop a vandalised abandoned Portlaoise estate 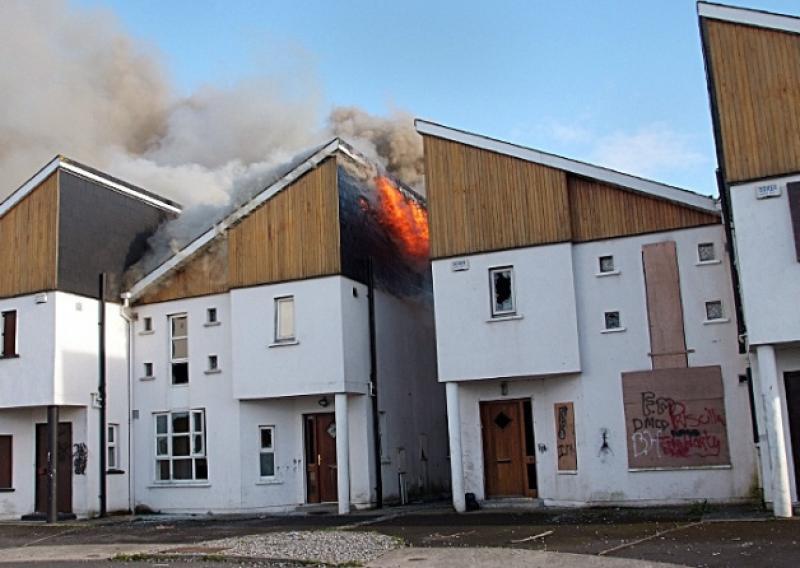 Hepburn Court during a fire, before it was barricaded up in 2013

An abandoned private housing estate in Portlaoise town that was destroyed by vandals, is still waiting a makeover by Laois County Council, because several derelict houses remain in private ownership.

Hepburn Court was privately built in 2004 on the Ballyfin road. Many of the houses were bought by investors to rent out. However some tenants vandalised and burnt down houses, leading to the council blocking off the whole destroyed estate in 2013.

Since then the council has been working to buy each house, and now has nine out of 12, as well as two halls. Their plans are to knock them and build a new council estate, to attempt to meet the council housing shortage.

No progress has been made however since the Kingdom hall was reported bought in October 2017.

At that time the council said it was considering rebuilding the estate in phases, because of delays in buying the last three houses.

Sinn Féin Cllr Caroline Dwane Stanley had a motion seeking an update at the January meeting of Portlaoise Municipal District.

“There are still a number of key sites within the development that are not in council ownership and that will be the priority over the coming months,” he said.

“We all know the shortage of land for housing. Residents are constantly asking me about this, it is an eyesore,” she said.

The council has “poured money” into the field it owns behind the estate she said, but now that is also attracting anti social behaviour.

“The gates at both ends have been rammed, cars are rallying and causing damage to property. Rubbish is being dumped, it’s pitiful,” she said.

“I asked that this is pushed along as soon as possible, residents on the Ballyfin road, Woodgrove, Lyndon Court and Mountain View have all suffered a lot,” she added.

Laois County Council has 1,575 people and families on its housing waiting list, as of last August.

Its first new Portlaoise estate for over a decade, Conniberry Way, is due to complete in February. Read more here.