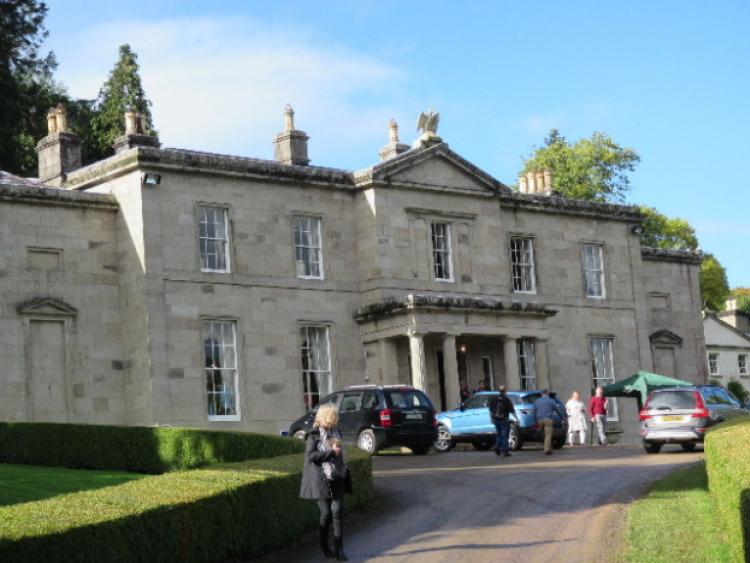 A US based businessman has sought permission to change farmlands in the foothills of the Slieve Bloom Mountains into a private golf course.

John Picerne bought Capard House in Rosenallis on 100 acres of land which boasts 13 bedrooms and six reception rooms for €4.2 million in 2015.

The founder of US company, Corvias Group, has applied to Laois County Council to change the agricultural land in the grounds of Capard Demesne into a private golf course.

His US company Corvias specialises in the construction, renovation and management of military and student accommodation in the United States, among other services.

The Laois estate was sold by antique and jewellery dealer John farrington in 2015 for €4,246,000 according to the property price register, making it one of the biggest sales of 2015.

John and his wife Heather Picerne registered a new Irish company, Capard House Ltd, on the same day as the sale of Capard closed.

A two-day auction of Capard’s furnishings attracted buyers from across the world, with notable sales including a pair of vases that achieved €560,000.

The golf course application does not propose any works to a protected structure however a number of applications for refurbishments have made since 2015.

Plans were conditionally approved to construct a 27 sqm single storey glazed orangery to the rear of the building and to construct a viewing terrace and steps to the front lawns of the main house.

John Picerne is a father of four daughters and a description of him on the Corvias website says "when he’s not at work, you can find John on the golf course or traveling to enjoy global cultures and cuisines".

Capard House was built in 1790 and was the third house to be built on the same site known as Capard Demesne.

The Capard House was home to the Piggott family. The family owned vast tracks of lands in both Co. Laois (The Queens County) and Co. Limerick. The Treaty of Limerick (1691) which brought an end to the Williamite wars against James II is reputed to have been signed at Capard according to fivestar.ie.

A copy of the Treaty was kept in Capard House up to the 1960`s when it was handed over to the National Museum.

There is a detailed description of the property on fivestar.ie.

"Over the past 20 years, the vendors have painstakingly and meticulously restored the house and wing, whilst maintaining the integrity of the original period features. All wiring and plumbing has been replaced and many improvements made. Their attention to detail throughout is evident.

"Their efforts went far beyond the residence and wing as the entire estate has been restored to its former glory with the terraced lawns and formal gardens broken into segments, the walled gardens, the long pond and lake, the folly and stables all combining to offer the new owner of Capard House, all the benefits of their labours.

"The main house is laid out with bright and generous proportioned rooms with ornate ceiling decoration and large open fireplaces. It is a perfect house for entertaining on a grand scale with all the main reception rooms leading off the main hall.

"Upstairs are the very generous bedroom suites, all with fine views either overlooking the gardens or with a panoramic vista over the surrounding countryside below.

"There is a terrific atmosphere of calmness at Capard which comes from the natural surrounds of the gardens and grounds with the stream flowing incessantly bringing nourishment to all the living plants, trees and flowers on the property.

"Capard is situated at the foothills of the Slieve Bloom Hills well known for its many and varied wildlife. Part of the estate has a special designation (SPA) Special Protected Area which is an area where rare and protected species can live in safety and their breeds can evolve. The surrounding habitat is very suitable for many leisurely purposes.

"The gardens at Capard have been largely created under the guidance of Arthur Shackleton over the past 20 years and are now maturing into one of the finer gardens in the country.

"Nestled on the edge of the Slieve Bloom Mountains with stunning views across the landscape and with acid soil and soft climate, it is the perfect place to create a garden," is written on fivestar.ie.

Laois broadband plan held up by delayed Government one size fits all approach.