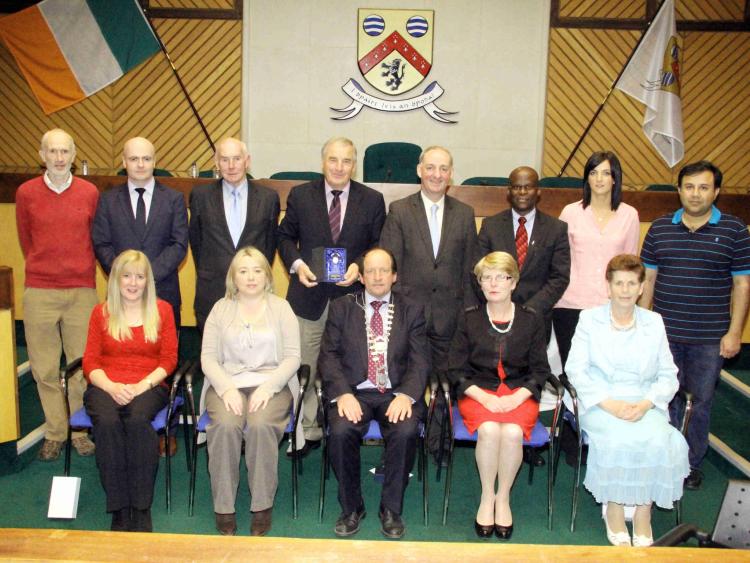 Cllrs Jerry Lodge and Rotimi Adebari among those at the final meeting of Portlaoise Town Council in 2014.

Cllr Jerry Lodge never needed to shout to have his voice heard is the compliment paid to the late Portlaoise councillor by Ireland's first black town Mayor.

Mr Rotimi Adebari served alongside Cllr Lodge from 2004 to 2014 while both were town and county councillors. During this time Rotimi made history by becoming Ireland's first black mayor in 2007 when he was elected to the role in Portlaoise.

"The father of Laois Council is gone and will be sorely missed! I knew Jerry to be a complete gentleman in my ten years of serving alongside him in Portlaoise Town Council and Laois County Council.

"Jerry never shouted nor raised his voice to get his points across, yet his inputs and contributions to any issue under discussion is valued and taken seriously across party divide.

"Jerry was a community person and to that community he gave his all! He worked tirelessly to ensure a better County in general and Portlaoise in particular.

"He never objected to any motion/idea that will improve the quality of life in Portlaoise and the county irrespective of where the motion is coming from. In my 18 years in Porlaoise, Jerry Lodge and Kathleen O'Brien (both now late) stood out as illustrious son and daughter of the town.

"I remember having coffee with him early this year (January) requesting to know what Portlaoise Municipal Councillors were doing to immortalise Kathleen for all her good work for the town of Portlaoise. We bounced few ideas together and he promised to get back to me in few weeks.

"Unfortunately, his promise of getting back to me in few weeks was never to be, because he has now gone to join his good friend Kathleen whom we were talking about. They will both be missed.

"Among other things, Kathleen and Jerry's determination to see Portlaoise among the tidiest towns in Ireland is unrivalled! These two guys deserve to be immortalised in Portlaoise for all their work. This is one of the ways we can say to future generations that Kathleen and Jerry lived, worked and died for their town (Portlaoise).

"I sincerely hope the present members of the council will take this on and ensure their efforts and sacrifice for Portlaoise does not go in vain!

"My heartfelt condolence to Patricia (wife) and his sons, Damian and Pauric. May the Lord comfort you and gives you all the needed strength to bear the loss.