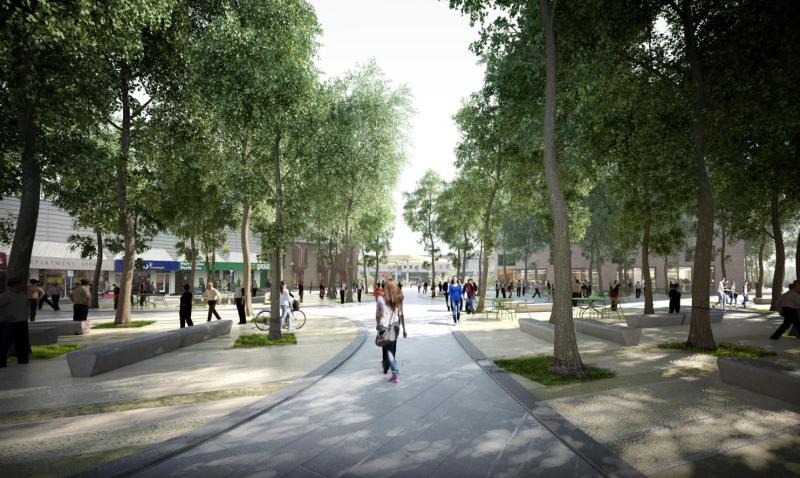 A 3D view of Lyster Square in the Portlaoise 2040 plan

Breathing new life into Portlaoise town centre through a number of regeneration projects is a huge focus of Laois County Council’s capital budget for the next three years.

The total spend for the next three years on capital projects in Laois is €128 million and projects within Portlaoise town centre account for a massive 20 percent of this.

Under many different schemes and projects, the capital programme outlines a budget of €26.8 million to be spent on enhancing Portlaoise.

Some of the projects in this Indicative Capital Programme specifically for Portlaoise include €9 million on the Portlaoise cultural quarter, €1.4 million on Portlaoise Public Realm and Laneway Upgrades Scheme, €2.7 million on making Portlaoise a Low Carbon Town, €2.9 million on Market Square, Main Street and Lower Main Street as well as a €60,000 facade enhancement scheme.

These all fall under the title of Urban Regeneration and account for €16,578,000 in total.

On top of this, there are other sections focused on Portlaoise such as €5 million on Tougher Business Park, over €4 million for Portlaoise Library, the largest investment in footpaths in the county is in Portlaoise at €900,000 and €100,000 for planning for the future of Portlaoise cemetery.

Also included in the total is almost €50 million on housing over the next three years including €8 million on buying houses and €40 million building houses. Improvements to council houses will amount to €600,000 while energy efficiency programmes for housing will cost €555,000.

Flood Risk Schemes for Mountmellick of €3.2 million, Portarlington €5.6 million and Clonaslee €400,000 are also in the Indicative Capital Programme.

Part of the Portlaoise 2040 plan is to make the town Ireland’s first Low Carbon Town Centre which will cost €2.7 million over the next three years.

According to the plan the aim is to reduce the impacts of car use on the public realm, promoting walking and cycling, and improving the mix of uses within the Town Centre.

“Making a genuine shift to a more pedestrian-friendly and low carbon place requires rebalancing the amount of car parking provided, and replacing a significant area of what is currently tarmacadam with green, planted areas and trees. This will reduce the amount of carbon emitted in these key public spaces, delivering significant health benefits. This can be achieved while facilitating a significant reduction in car use in the central public spaces of James Fintan Lalor and Lyster Square.”