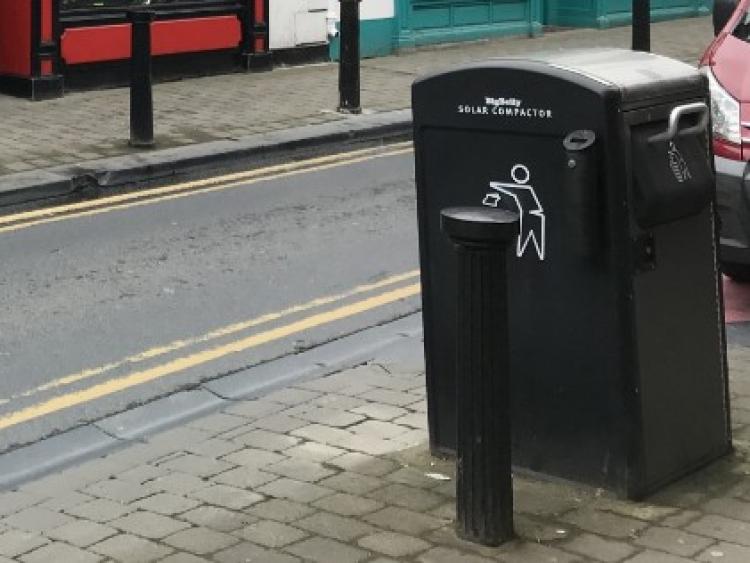 Each one of Portlaoise’s solar-powered rubbish bins costs thousands of euro but it is unlikely that other towns or villages are going to get some of the same because the saving may not outweigh the cost.

That was the message from Laois County Council senior management to county councillors representing the Borris-in-Ossory Mountmellick Municipal District.

Cllr Ollie Clooney had tabled a motion calling on the council to install solar bins in Durrow. He said ordinary bins are being 'abused' and said the street solar bins, which compact rubbish, would be a great advantage.

The official written reply from Mr Edmond Kenny, District Engineer, said that funding for the Portlaoise bins was given through the Urban Regeneration Fund which closed in 2019. He said an application could be considered under future programmes. The number of Portlaoise compactor bins increased to 50 under the scheme.

“What is the cost of these bins,” he asked Mr Donal Brennan, Director of Services.

“You wouldn’t want to buy one,” replied the director.

“You are,” responded the Director.

Mr Brennan said that while they are expensive, fewer collections are needed due to the compaction of waste. He indicated that this labour cost saving justified buying the Portlaoise bins.

“You’d have to carefully assess what areas you’d have to put them (elsewhere). We have them in Portlaoise because we can save in visits,” he said.

He indicated that a cost-benefit analysis would have to be carried out due to the upfront purchase price.

Cllr James Kelly said bins are a gathering spot for rubbish and some are crammed. He said homeowners can get a grant of up to €3,000 for a household solar compactor.

Cllr Conor Bergin asked if a camera can be placed on the bins. Mr Brennan said cameras can be installed to monitor waste illegal dumping. Cllr Bergin said surveillance is very important.

Cllr John King said bins outside fast food outlets are a problem and attract vermin. Mr Brennan replied that there is a responsibility on the outlet to keep the area outside takeaways clean.