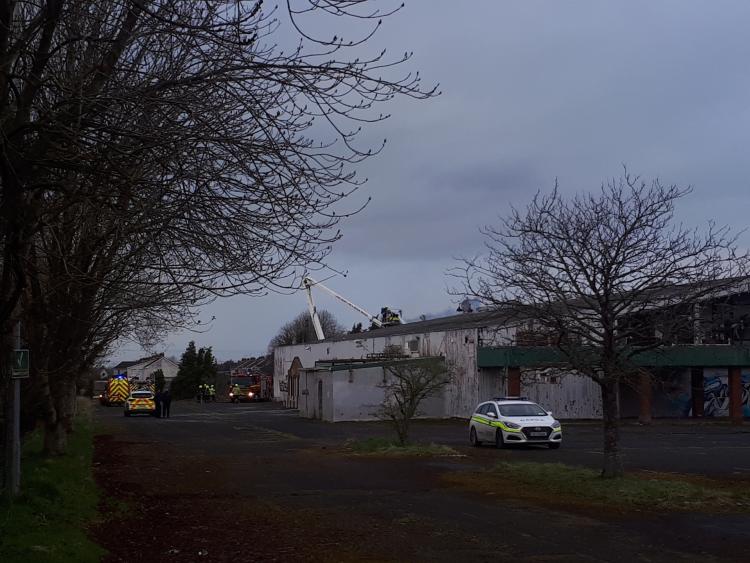 Fire at Centrepoint in Portlaoise on March 24

Laois County Council lost a battle to have the Centrepoint shopping centre in Portlaoise declared vacant in 2019.

An Board Pleanála ruled against the council in July 2019 following an appeal by the then declared owners Kyle Estates Ltd.

The board overturned the attempt to place it on the Vacant Site Register despite getting a damming inspection report from its own inspector which found the site was in a ruinous condition. In doing so, it accepted the claim by the then owners that the site was not neglected.

The inspector found that the site was a location for anti-social behaviour following a visit.

However, the board did not agree that the property has "adverse effects" on the character or the amenities of the area.

The council began the process of having it declared vacant in 2017 when it prepared a report on the property.

An Board Pleanála's inspector noted that the council said in its 2017 report that the regeneration of the lands would assist in making efficient use of public infrastructure and facilities and deliver homes to meet identified needs.

The council found that the lands were vacant and idle and have been "abandoned" following the closure of the previous use.

County Hall also reported that the lands have a negative impact on the character of the area, due to their derelict appearance.

It added that the lands benefit from access to extensive existing public infrastructure and their lying vacant reduces the amenity provided by such infrastructure.

An Bord Plenála summarised the appeal made by Kylebeg Estates in an appeal lodged in March 2019.

It claimed that there has not been a reasonable amount of time for potential development to be progressed since the Portlaoise Local Area Plan 2018-2024 came into effect. It added that the lands were on the market, but there is a weak commercial property market.

The owners noted that although the buildings were vacant, they are maintained and regularly tidied and repaired. It said "the site could not be considered ruinous or neglected".

The owners also maintained that there was "no recent evidence that there is any issues with antisocial behaviour associated with the subject site". The inspector said that the owners claimed the site was "fenced off to ensure the site cannot be accessed by trespassers".

The inspector found that the appellant’s main contention was that whilst vacant, the site does not give rise to adverse effects on existing amenities or reduce the amenity provided by existing public infrastructure and facilities.

The An Board Pleanála inspector visited the site to assess the legitimacy of the Council's decision and the subsequent appeal.

"During the site visit, it was noted that the existing structures on the site have a dilapidated appearance. They have been vacant for some time and have a poor visual appearance, considerably detracting from the amenities of the area. Notwithstanding the contention of the appellants that the structures are regularly maintained, I consider that the site accommodates structures that have a neglected and ruinous condition," said the final report.

The Inspector found in favour of the council in relation to dereliction.

"I am satisfied that the neglected and derelict condition of these vacant lands has an adverse effect on existing amenities and reduces the amenity provided by existing public infrastructure and facilities (within the meaning of Section 48 of the
Act 2000) in the area in which the site is situated, particularly due to the strategic location of the lands in proximity to the train station and other physical and social infrastructure. The site and has an adverse effect on the character of the area," it said.

In relation to antisocial behaviour was taking place in the area, the report was clear.

"The wider site is strewn with litter and there was evidence of alcohol cans and bottles smashed and discarded across the grounds. I am satisfied that there is clear evidence of antisocial behaviour taking place on the site and in the general area and that the neglected and vacant condition of the subject lands contributes to this," it said.

The inspector recommended that the property be entered on the Vacant Site Register from the date decided by Laois County Council in February 2019.

The Inspector recommended that as soon as possible after the entry on the vacant site register and at least every three years thereafter, a market value of the site be obtained served notice on the owner.  This allows for charges to be made against the owners.

However, the board members of An Board Pleanála did not agree. They say the submissions on this file and the Inspector’s report were considered in August 2019.

The Board determined by a majority of 2:1 that the site was not a vacant site within the meaning of the Urban Regeneration and Housing Act, 2015, as amended, for the following reasons and considerations.

The Board considered that it is appropriate that a notice be issued to the planning authority to cancel the entry on the Vacant Sites Register.

"In deciding not to accept the Inspector’s recommendation to, the Board did not agree that the site has adverse effects on the character or the amenities of the area," said the board's decision.