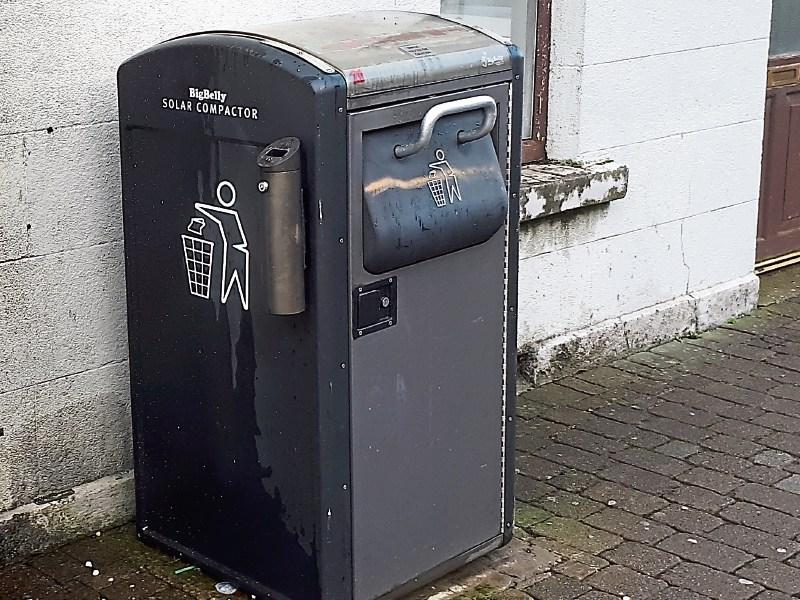 One of several solar compator bins in Portlaoise

A two week wait has turned into six months to get a bin replaced in a busy residential area in Portlaoise.

Laois County Council removed a bin from the former Hanlon's Shop on the Mountmellick N80 road before last Christmas, a road where thousands of people live with only a handful of street bins.

It will be replaced by a Bigbelly solar powered compactor bin.

Cllr Catherine Fitzgerald tabled a motion to the May meeting of Portlaoise Municipal District asking for a replacement, and more bins from Fairgreen to the town centre.

She said that the only bins are at Dunnes Stores and next in Market Square in the town centre.

“I just think the whole Mountmellick Road needs to be looked at. We're encouraging people to carry rubbish but they are"We  appealing for more bins. It's the least we can do with Tidy Towns out volunteering. Hopefully it will prevent litter being dropped” she said.

Cllr Willie Aird said he was told last February that the new bin would be there in "a couple of weeks".

"The couple of weeks is going on since February. It will be six months. I don't think that's fair. We should be replacing bins immediately when we take them out," he said.

In reply engineer Wes Wilkinson said the replacement bin is now being refurbished and will be in situ within five weeks, by the end of June.

The council said that there are "currently no plans to extend the town/street bin scheme out the Mountmellick Road from the town centre to Fairgreen".

Cllr Caroline Dwane Stanley suggests that the council consider adding streetbins all the way down the road and along the ring road.

"I do see Tidy Towns volunteers on the ring road constantly picking up rubbish. Dog fouling bins are badly needed," she said.