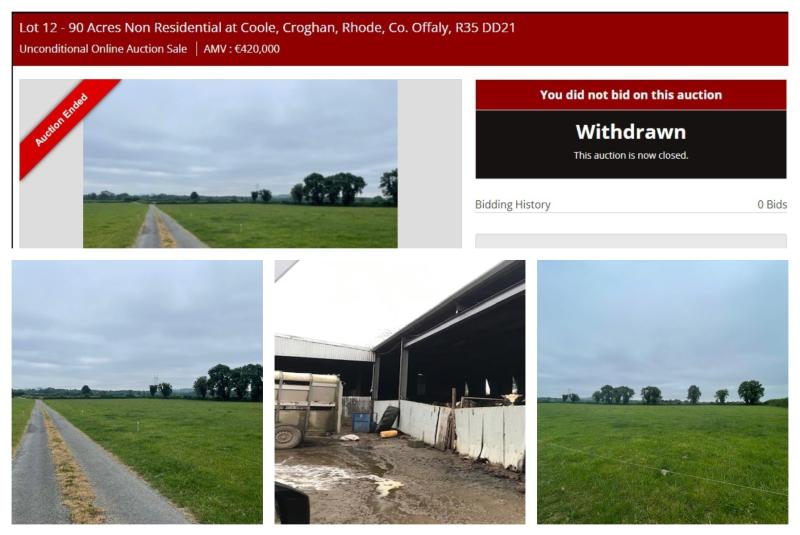 Farm land in the midlands has been withdraw from auction after the IFA made clear it opposed the sale which it said was being sold by a vulture fund.

The BRG Gibson Auctions website has reported that lot 12 a 90 Acres Non Residential at Coole, Croghan, Rhode, Co. Offaly was withdrawn from an online auction.

The property was due to go under the hammer at an unconditional online auction on July 29 at an advised minimum value of €420,000. The poperty was marketed at investors.

However, the the auctioneers website stated on the day of the sale the auction had ended because the property was withdrawn from sale. No bids were recorded.

The Irish Farmers Association opposes the forced sale of lands the Vulture Fund 'Everyday'. IFA said it was holding a protest this morning at the Conway family farm on the day of the sale.

Martin Stapleton, the Chairman of IFA's Debt Support Service, said that IFA had attempted to negotiate with the fund earlier this week on behalf of the family but that the fund was completely unreasonable.

"Vulture funds have no understanding of the family farm. Their only objective is to get as much money as they can as quickly as they can. They are not willing to allow a reasonable amount of time for farmers to repay their debts. They just want to cash in," he said.

"It is not acceptable for vulture funds to force the sale of land that has come as security with a debt bought from a bank when there is a viable alternative."

Mr Stapleton asks the farming community to stand together in solidarity with the Conway family in opposing the sale of the property.

"The Conway family put forward a credible proposal to make structured repayments. The vulture fund has refused the offer from the Conway family to pay the debt in full. This is completely unacceptable to IFA," he said.

Mr Stapleton said farm families should get time to repay their debts over a longer term to keep the farm intact.

"IFA will stand firmly behind farmers who are committed to agreeing and implementing a credible solution to settle their debts," he said.

IFA Farm Business Chairperson Rose Mary McDonagh said there is an inextricable link between farm businesses and family homes passed down through generations of farm families.

"On the back of the strong offer made by the Conway family to repay this debt, IFA cannot stand by and allow this forced sale," she said.

"The fund and the auction house should halt the sale immediately and re-engage with the IFA and the Conway family," she said.