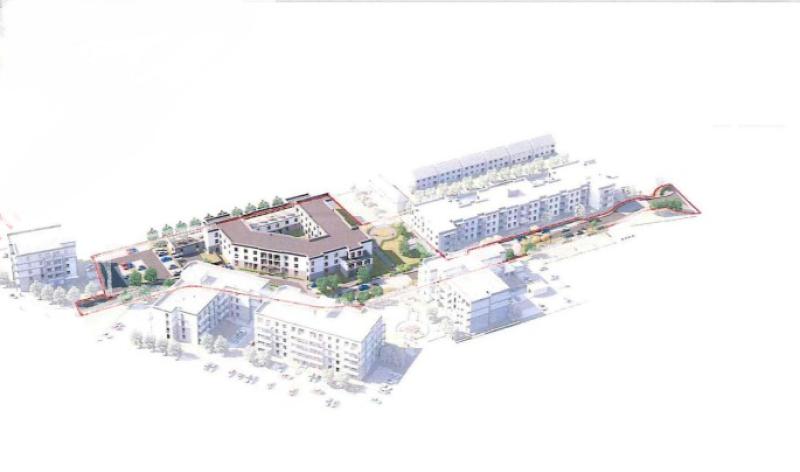 Laois County Council has given the conditional green light to a major apartment complex in the heart of the Portlaoise on the site of the Minch Norton Maltings.

The council has given planning approval to The Maltings & Granary Ltd to build two five storey and one four storey apartment buildings on the site which is the subject of a major development project.

The application for the four storey apartment, Block 4, said it would contain 27 two-bed apartments.

Apartment Block 5 will be five storeys high and contain 38 two-bed apartments and one 1-bed apartment. The developer said two apartments will be used for short term use by the close relatives of the nursing home residents in the case of a health crisis. A nursing home is also part of the masterplan for the site.

The council also reached a decision on a second apartment block (Block 3). The developers applied for a five storey high building containing 19 apartments of which 14 would be two-bed apartments and five one-bed apartments.

A document submitted to Laois County Council during the planning process on the density of the development said that a total of 149 housing units were planned for six blocks across the site near Portlaoise Train Station.

It said Block 1, which had 40 units, was already permitted while a sixth as yet unapplied for block would include 25 homes.

Permission was granted in 2020 for a nursing home on the site. The applicants sought permission to construct a 101-bed nursing home with a 5184.85 sqm ranging from 1-3 storeys high block.

Developer Pat Flanagan is one of the main driving forces behind the entire project. He has been involved with Owenass Developments which built the nearby Esker Hills and Fairgreen housing estates in Portlaoise during the property boom.

Conditional planning permission was granted in 2004 to Maryborough Constructions Holdings for a mixed use development with a maximum nine storey height. It consisted of a three storey retail development, two pubs, a six storey office development a multi-storey carpark with capacity for more than 600 cars.

The project was due to get underway in 2005 but Maryborough Construction went into receivership in January 2008.

Maryborough Construction Holdings Ltd had already drawn down €23.5 million of a €84.5 million loan advanced by Anglo Irish Bank to purchase and develop the site.

The height of the latest apartments goes against the wishes of county councillors in Laois. They have attempted to have new apartment blocks above a three storey height banned in Laois.

The latest project does not include the redevelopment of the Minch Norton offices on the corner of Harpurs Lane and the Mountmellick Road.