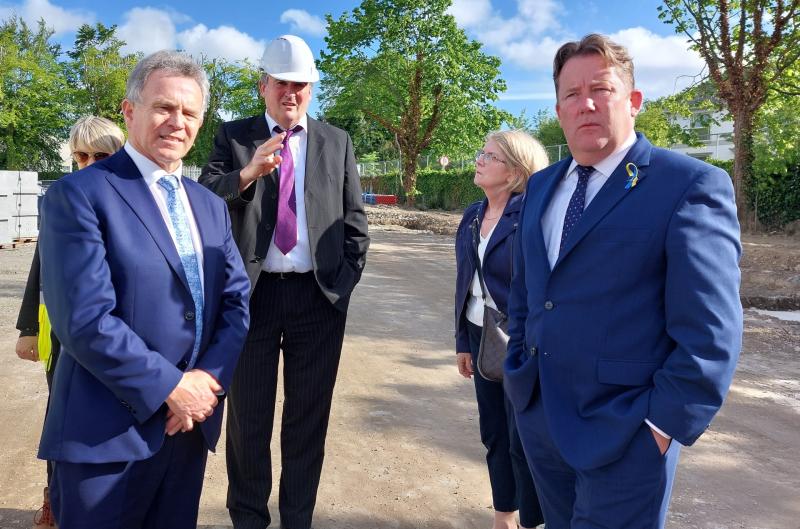 The Minister for Housing visited Laois today where he predicted that a widening of the social housing income threshold will lengthen the waiting list.

Currently at 1,761 names waiting on a social house, the Laois income threshold is the lowest possible, at €26,000 for a couple with no children, effectively eliminating anyone in a low paying job from either getting a council house or affording a mortgage.

Minister Darragh O'Brien said changes will be "straight away" after a decision is made later this summer.

It's a nationwide review, it's not just for Laois but in fairness Minister Sean Fleming and the representatives here have been asking about it. There hasn't been a proper review done in 11 years. It will be concluded by the end of the summer. Once the changes are made, the local authorities are advised in the changes in income thresholds and that straight away changes what the criteria is to apply. To do that we need to make sure we are delivering the homes and it's good to be in Laois today to see such an effective social housing building programme. I can assure you the review is nearly concluded. It will be implemented pretty much straight away," he said.

He accepts that this will bring a surge to the waiting list.

"That's why we have planned in the Housing For All 90,000 new social homes (in Ireland). We've targeted 9,000 more this year which will be more than was delivered in the history of the state. Obviously if you broaden the income thresholds it will allow more people into the scheme. That's the reality but that's why we are building more homes.

"And we need to do that because we had two years of Covid where we had significant construction shut downs which inhibited building growth. This year the projections are good. Nearly 6,000 completions so far this year, the highest since 2011, and we've had 35,800 new housing commencements in the last 12 months. No one is disputing the scale of the challenge but we are making progress," Minister O'Brien said.

He gave a response to Laois TD Brian Stanley's statement that people are stuck in a "rent trap".

"Sinn Féin opposed a help to buy grant that would have helped 32,500 people to buy their own home. They opposed a €30,000 grant. They strangely enough opposed another measure I brought forward, the shared equity scheme which is going to help thousands of people who are renting to get out of the rent trap. I expect that type of stuff from Sinn Féin but people deserve that they come up with alternatives. We're delivering. I'm acutely aware of the issue with regard to rent and that's why we're providing more homes to people," he said.

With Laois County Council staff and local councillors, Minister Darragh O'Brien toured three Laois social housing construction sites on Monday, May 16 to highlight the amount of houses under construction. The sites he saw were Gleann na Glaise with 10 houses in Ballyroan, Sean Doire in Durrow with 22 more, and the old CBS site beside Portlaoise train station where 13 of 67 new apartments will be complete in September.