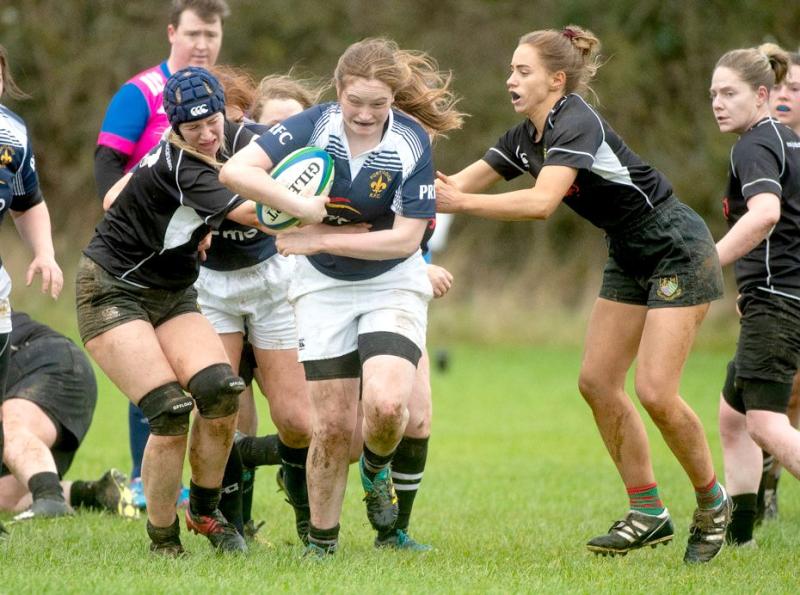 PORTLAOISE Women welcomed Longford Women to Togher on Sunday for a fixture, the result of which, might well decide who is going to be in position to challenge Naas at the top of the table come the end of the season.

Longford kicked off with a strong wind behind them and went on the attack immediately. The muscular Longford pack looked for contact and sought to dominate their smaller opponents and with strident vocal support from the sideline they took the game to Portlaoise in the first ten minutes.

This Portlaoise team however have shown their resilience over the last few weeks and they stuck gamely to their task and 15 minutes in they started to achieve dominance at the breakdown. They gradually worked their way up the pitch and following several strong drives by the Portlaoise forwards, the Palmer girls and Aoibhean Egan drove into the Longford 22.

The continuous pressure forced Longford to offend at the breakdown which resulted in the referee awarding a penalty to Portlaoise close to the posts. Commeth the hour, commeth the woman and scrum half Jenny Keegan stepped up and slotted the penalty to give Portlaoise a 3-0 lead 20 minutes into what was to become a real arm wrestle.

On the half hour mark Longford won a penalty at the breakdown which they elected to kick to the corner from which they established a good attacking position five metres from the Portlaoise line. Despite Rebecca Mullen’s best efforts at the front of the line out, Longford managed to win possession and, after several strong forward drives, they forced their way over the Portlaoise line to make it a 3-5 going into half time.

The Portlaoise women re-organised at half time and from the restart they established a position in the Longford half which they maintained throughout the remainder of the game.

The Longford defence proved resilient with strong tackling in open play allied to aggressive tackling and rucking in the contact area. While Longford struggled to move play from inside their 22-metre area, they were beginning to frustrate the Portlaoise women with their resolute defence and spirited play resulting in the home side conceding penalties in the face of this resolute defence.

Portlaoise however possess a never say die spirit so they kept pushing forward until eventually, having failed to cross the whitewash with yet another drive, they were awarded a penalty in front of the posts.

In such a close game conventional thinking would have been to kick your points and secure a one point lead going into the last quarter. But the Portlaoise ladies decided that they wanted to score the seven points so they ran the penalty from short range.

The Portlaoise wave kept coming and they eventually crossed the line only for the referee to call it ‘held up’ much to the Portlaoise girls dismay with 10 minutes remaining on the clock. From the ensuing goal line drop out Longford briefly gained a foothold in the Portlaoise half but strong running and astute kicking, from several penalties conceded by Longford, soon saw the Longford girls back in their own 22 desperately defending their narrow two point lead.

Time after time the Portlaoise forwards picked and drove into the heart of the Longford defence only to be repulsed. Then just as defeat seemed inevitable, up stepped out half and club captain Amy O’Callaghan to break down the right hand side of a ruck.

As usual she was met with a bone jarring tackle but this time her twin sister Lyn was on hand and she latched onto her sister who drove her over the try line for the decisive score.

On a day for the forwards Rebecca Mullen was outstanding and she was ably supported by all the forwards who stuck to their task manfully on a really tough day. The five front row forwards used on the day gradually achieved ascendency over a powerful Longford front five through real hard work and no little skill.

They were supported in this by second rows Catherine Delaney and Aoibhean Egan with superb rucking and cleaning and with aggressive carries close to the ruck. The back row was outstanding with Emma Smith producing yet another excellent performance while Aly Holmes showed all her experience leading the way into every contact.

The player of the game was, without doubt Becca Mullen who dominated the lineout, made several crunching tackles and carried the ball with aplomb.

In the backs Jenny Keegan kept the pack moving forward and moved the ball out to Amy O'Callaghan when the time was right. The out half was always a running threat and she brought centres Patrycia Harrisam and Sandra Keegan into the game at the right time.

The centres ran and tackled well while neither wingers or fullback Lyn O'Callaghan got any real opportunity to shine in attack on a wet and difficult day.