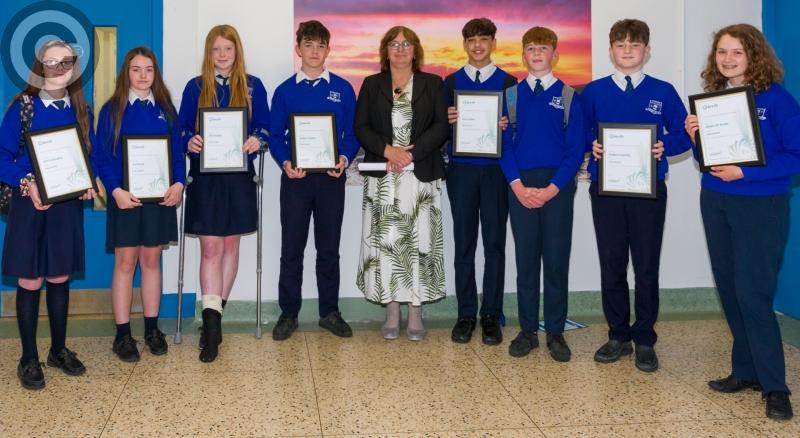 A warm tribute has been paid to Ms Aoife Elster, Principal of Dunamase College, Portlaoise by the Laois Offaly Education and Training Board (LOETB) following the announcement that she intends to retire at the end of this academic year.

Ms Elster was appointed as Principal of the newly established Dunamase College when it first opened its doors to students in 2017 and she brought a wealth of experience to the role. She had previously been founding Principal of Choláiste Ghlór na Mara, a 1,000 pupil second-level school in Balbriggan, Co Dublin and been involved with Gael- Choláiste Chill Dara in Naas from its inception in 2004.

The LOETB, which is the school's patron, said that in her current role, Ms Elster has overseen the significant growth and development of the school where students can study through mainstream English and through Irish in the Aonad lán Ghaeilge. A statement said that the school continues to grow year on year, offering increased choice for parents and students at post primary level.

The LOETB added that while the school based in the centre of the town, work has commenced on the new €24.5million 1,000 pupil school which will be located on the Timahoe Road.

Joe Cunningham, Chief Executive at LOETB, said that Ms Elster was appointed as the first principal of Dunamase College and was tasked with developing the first new post primary school in Portlaoise for many years.

"Aoife has made a momentous impact during her time as Principal of Dunamase College, and has expertly guided the development of the school in partnership with the entire school community. Aoife’s vision for an innovative, student-centred school with an emphasis on excellent learning experiences has been firmly established.

Her commitment has ensured that she is leaving a thriving school facing the next exciting chapter in its development," he said.

Linda Tynan, Director of Schools at LOETB, thanked Aoife for her significant contribution to the growth and development of the school.

"Aoife has been immersed in the life of the school, she is a dedicated and exceptional Principal who will be greatly missed by the staff, students and her colleagues at LOETB. In the short life of Dunamase College, Aoife has overseen so many important milestones and achievements. I am very grateful to her for her dedication to the students and the school and wish her well in her retirement," she said.

The process to appoint a replacement as Principal at Dunamase College has now commenced and it is expected that the new Principal will be in place in advance of the new school year.