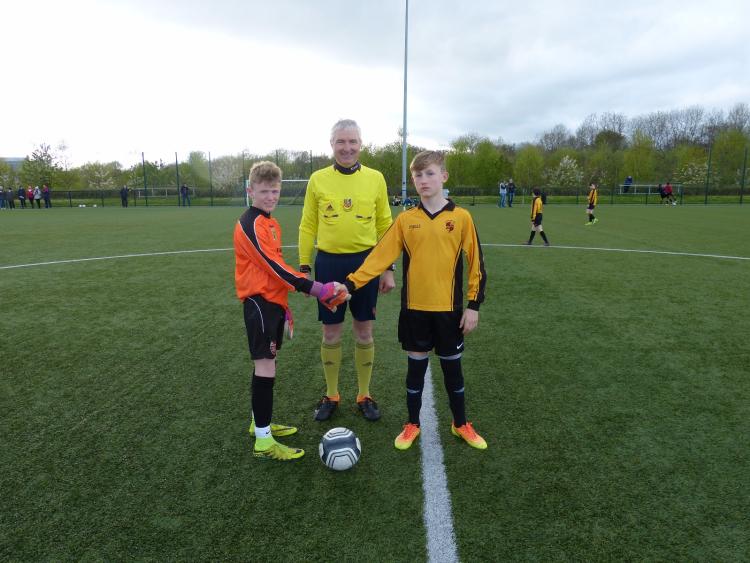 After knocking local rivals Arlington AFC out in a home tie in the previous round, it was the turn of Portlaoise United to hit the road in the Lions Club National Cup Competition Quarter Final match.

Portlaoise Utd were drawn to play away against Limerick's Aisling Annacotty AFC who switched the fixture to be played at University of Limerick Sports Campus in Castletroy. The facilities and surface were top class and it turned into an excellent game of football to compliment the surroundings.

Utd started really well and almost made an instant impact following great work between Dan Ubesie and Jamie Toman leading to a close range effort by Alex Bennett causing the keeper to save low at the base of the post on the line.

The next few minutes saw both sides test each other and probe for a gap in the defences. It was a good opening to the game.

Utd had started with the same team that had beaten Clane Utd a few days earlier and so some of the Utd players were adapting to their positions. Ben McDonald was playing really well alongside Evan Hewitt at the back and was involved in a lot of the play and linking up well with Mattie Kocon who had an excellent game getting up and down the lines.

Luke Makim was playing alongside Cian Rafter in the centre and had their work cut out against several quick breaks by Annacotty.On eight minutes an early warning was sounded by Annacotty from a corner only cleared to the edge of the box by Utd. A well struck shot came back in but it was high and wide of the goalpost angle.

A few minutes later Jamie produced a mazy run after good defending by David Burke and Kanye Tshula. Jamie's run from his own half tested several Annacotty players but he was just crowded out before offloading his shot.

Annacotty went 1-0 up after being dubiously adjudged to be onside by the referee and the striker beat the outrushing Utd keeper Conor Brown low to his left. Annacotty had been threatening on the break beating Utd's midfield for pace in the build up to this despite, Cian Rafter putting in another battling display.

Utd had a good opportunity though to get back level almost immediately but Alex was unlucky under pressure not to get more behind his shot and it was saved.

The equaliser did come five minutes later after super work down the left by Jamie Toman who was terrorising the defence to fire a ball across the goal mouth. Alex made no mistake when he stuck the ball into the net after it was deflected into his path.

Utd at 1-1 played with more urgency as they pushed for another goal but Annacotty were also dangerous on the break with a very lively diminutive number 10 who was deceptively strong on the ball.

Good work from Dave Burke again found substitute Ben Doyle who passed to Dan and Dan's shot was just pushed out by the Annacotty keeper.

Good sustained pressure from Utd followed but the best results were a few corners that yielded no reward, leaving it 1-1 at half time.

Portlaoise Utd were at times guilty of overplaying the ball in various positions and being robbed of possession in the first half and this nearly brought an early consequence as the second half began.

Utd midfield and defence lost the ball, when a quicker pass would have taken the ball out of trouble, and only for fast backtracking and a timely intervention by Ben Doyle the ball was heading goalward.

Utd had another let off on 33 minutes after a poor clearance let Annacotty in and the number 10 shot just wide.

Two minutes later saw a super steal by Ben McDonald from an Annacotty kick out and his screaming shot from 35 yards was just tipped over by the keeper. Barry Fitzpatrick had come in at half time adding more steel to the back line and it was starting to make a difference.

Jamie, still running riot along the lines and being well fed by Cian Rafter and Ben Doyle, caused more panic in the Annacotty defence on 43 minutes which saw him get to the end line, but he was smothered out at the second attempt by the keeper after a lucky break off his defender.

With 46 minutes on the clock it was 2-1 to the away side. Ben Doyle under hit his half volley shot from the edge of the area but the loose ball was gathered excellently by Jamie in the box and his trickery beat the keeper with a super finish from amongst a mass of defenders around him.

Two more great chances followed from Jamie as TJ Delaney was getting in amongst the action up front and Ben Dwyer and Cian Bartley Bray were helping defensively.

TJ had a great effort saved by the Annacotty keeper just after Conor saved at other end.In the last few minutes, TJ was  unlucky not to be awarded a penalty for a blatant push in the back which was compounded when a very similar foul went against Utd outside the box about a minute later.

The final whistle went and Portlaoise Utd progress 2-1 to the National Cup Semi Final against a not yet confirmed opponent. A big performance brought about a big win after a long journey.

Man Of The Match was Jamie Toman who was excellent throughout.