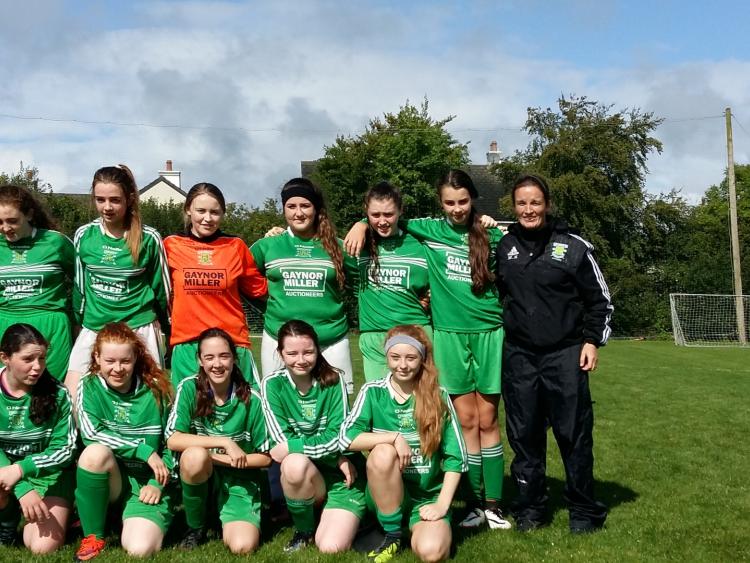 The Portlaoise U-16 Girls team with coach Maria Keane.

Portlaoise U-16 Girls got their season up and running on Saturday when they welcomed Bealnamulla to Rossleighan Park.

Portlaoise started brightly and had plenty of early possession even though they were playing against the wind. Bealnamulla eventually settled and using the wind they had the Portlaoise defenders under pressure. The defence of Leah Nolan, Ava Prendergast, Bronagh Carroll and Leah Malone (playing her second game of the day) stood firm.

Any time they looked in trouble the centre midfield pairing of Molly Gleeson and Amy O' Brien dropped deep to help them out. Chloe Cuddy was solid in the goals and was trying to find her midfielders with her clearances and kickouts. Ailbhe Quinn and Rachel Horan were a threat on the break for Portlaoise and the play was end to end for most of the first half.

At the middle of the half, Portlaoise had their best spell and two corners nearly resulted in scores. From the first, a low delivery from Ailbhe went accross the box with strikers Holly Dunne and Avril Carroll and the midifeld players all just unable to get the final touch on the ball.

Amy O'Brien and Rachel Horan tried to set up a chance on the edge of the box from the second corner, but the chance was blocked. Minutes later Bealnamulla broke free and scored the opening goal. Five minutes later a mix up in the home defence was punished. Chloe Cuddy made a great save to keep the score at 2-0 at half time.

Portlaoise upped their game in the second half and pushed for the goal they deserved. Chloe Cuddy used the wind to launch her kickouts deep into the opposition half and the girls were always a threat. They won multiple corners but could not get a break in the box.

Coach Maria Keane shuffled her players to try and create more opportunities. Unfortunately, after a sustained spell of pressure from the home side, Bealnamulla caught them on the break and again scored. Amy O'Brien then had a great free kick for Portlaoise, but the Bealnamulla keeper made the save and was just about able to gather the ball before Holly Dunne could score.

The Porlaoise girls never gave up and kept attacking til the final whistle. Bealnamulla scored from a free kick just before the end for a flattering 4-0 scoreline but the home team and manager Maria should be pleased with their efforts.