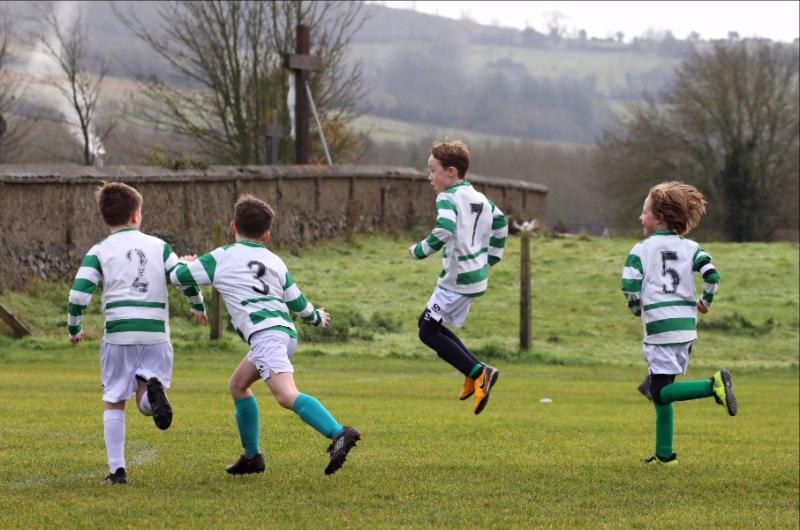 Portlaoise United had their biggest win of the season so far and also there first clean sheet. Both sides got off to a slow start with Portlaoise doing most of the attacking.

The first goal arrived after ten minutes when Conor Dunne finished off a great move down the right and put the ball into the roof of the net. That seemed to settle Portlaoise who then began to threaten the T&S goal every time they attacked.

Ryan Keane, Rhys Lawless, Rocco Reilly and Holly Murphy were all involved in some great moves which lead to Dennis Browne scoring two more goals before half time to make it 3-0, and Portlaoise were well on top now.

Portlaoise made a lot of positional changes for the second half with Leah Brennan and Holly Murphy playing up front with Danny Gavin and Tom Coleman in the backs. Portlaoise continued to dominate and they added to their tally with two great goals from Harry Browne who had worked hard for possession each occasion.

These goals broke the T&S spirit and more goals were to follow from Charlie Dwyer, Danny Gavin and Tom Coleman. T&S to their credit never gave up and were unlucky not to score a goal themselves. Gary Brennan, Ross Dunne and Oisin Duffin all had a big part to play in this victory.

The players have worked hard on improving their skills in training over the last few weeks and it's great to see the results on the pitch. A word of thanks to Ben and Konrad for helping out with the teams warm-up before the match and also to Keith Lawless. Best wishes to coach Derek McGinn who is in the big musical production in the theatre this week.

T&S coaches to their credit are doing a great job with their second team. They face great challenges going forward but are well capable of taking them on. Keep up the great work lads it's so important for the kids.

Portlaoise Athletic U-10 travelled to Ballyroan to take on Abbeyleix Utd on Saturday last. Despite tricky conditions and the absence of a number of players, the squad put together their most complete performance of the season.

Boosted by the return of Ethan Kelly and Dawid Nowodka, from injury and holidays respectively, they took the game to their hosts in the opening stages. Artiom Volkov was excellent in midfield, with Ben Peacham and Jack Phelan causing lots of problems from out wide also.

Sean Conka was always a handful up front, and it was his shot, which crashed off the crossbar, that constituted the first clear chance of the match. Conka and Volkov combined again shortly after and from the resultant pass Phelan coolly slotted home to give Portlaoise a deserved lead.

The defence, excellently marshaled by Kelly and the outstanding Cian Fitzpatrick dealt well with the Abbeyleix attacks, with full-backs Conor Bowler and captain Eoghan Kennedy also prominent in both defence and attack. Portlaoise doubled their lead early in the second half. Peacham capitalised on some excellent play from Kennedy and Nowodka to fire expertly into the bottom corner.

Abbeyleix continued to cause problems of their own however, and Portlaoise were thankful to Jack Murtagh and Bowler for some excellent tackles and interceptions, as well as an inspired performance from goalkeeper Ryan Greene.

It was some excellent skill, determination and bravery from man of the match Fitzpatrick that created the match-clinching third goal. After winning possession near halfway, he shipped a heavy challenge as he played a perfect through ball for Phelan to chase. Credit must go to the referee for playing an excellent advantage and Phelan made no mistake for his second of the match.

Some fine passing created a number of further chances with Kennedy, in particular, unlucky not to add to the tally. All eleven players deserve great credit for the performance, with a much sought after clean sheet testament to the organisation of goalkeeper Greene and his defenders.