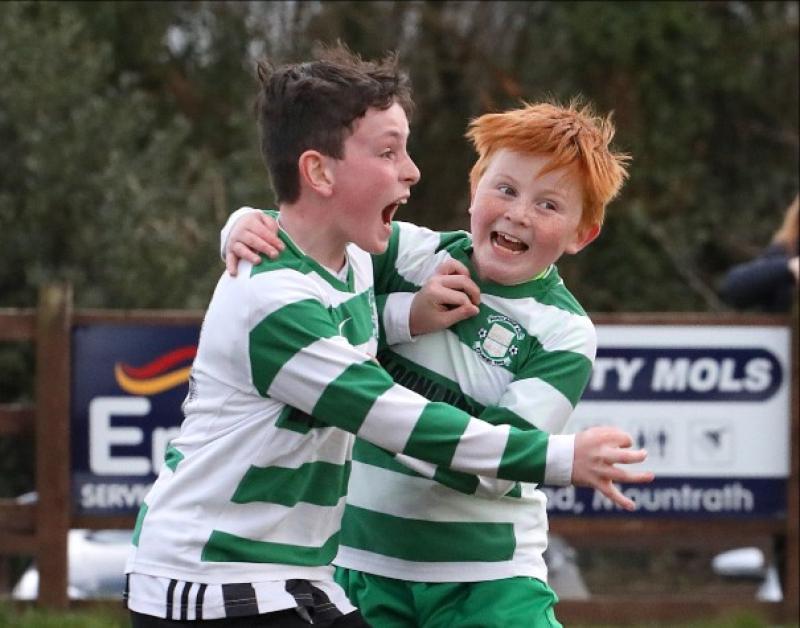 This was the last league game of their first season for this U-10 team, and like many of the games during the season it was full of entertainment also.

The players were as excited going to play this game as they were for their first game of the season which says a lot about the club policy of giving all players equal time playing and also playing in various positions.

Portlaoise started the strongest and put St Aengus under pressure early on. Dennis Browne, Oisin Duffin and Harry Browne were causing all sorts of problems for the defence. Meanwhile Holly Murphy, Rhys Lawless and Conor Dunne were winning the midfield battle.

Portlaoise found it hard to get past the hard working home defence and paid the price just before half time when a mix up in defence resulted in a well struck effort finding the net.

This goal stunned Portlaoise and within a minute of the restart they found themselves two down following a well worked goal. Portlaoise rallied now with Rocco Reilly going close from a corner, while Ross Dunne, Charlie Dwyer and Finn Dawson were doing their best to get their team back in the game.

Portlaoise got a number of corners and finally the pressure paid off when an effort from Tom Coleman hit a St Aengus player and ended up in the net; game on. Portlaoise were now dominating the game and Gary Brennan went close to an equaliser, while in defence, Ryan Keane, Danny Gavin and Leah Brennan were dealing well with any St Aengus attacks.

Portlaiose got an equaliser with five minutes left when Tom Coleman popped up again to score his second of the game. Portlaoise were not content with that and sensed a win was on the cards, but St Aengus had other ideas and but for a great tackle by Leah Brennan they would have regained the lead.

Portlaoise hit back again and a great move resulted in Tom Coleman picking up the ball and firing home for his hat-trick. This goal proved the winner to the delight of the Portlaoise supporters and bench, a fine way to end the league campaign.

An important lesson learned by this victory, never give up no matter what the score. St Aengus players will be disappointed by the result, however they played a big part in a very exciting game and the players are a great credit to their club and parents, they will go on and continue to make progress as time goes on.

Keep the work rate and heads up lads.

SEE ALSO - Here are all your MSL Fixtures for this week