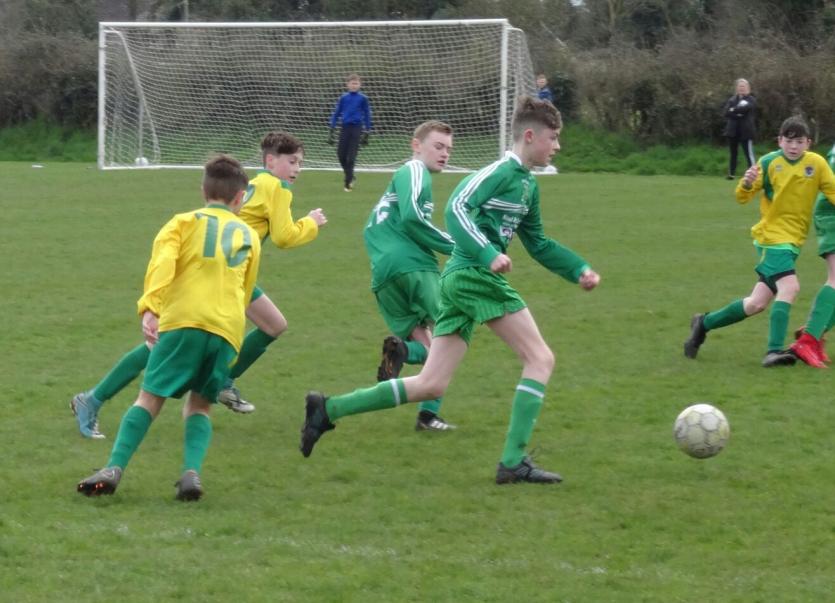 Portlaoise Utd welcomed Mullingar Puma’s to Rossleighan Park on a pleasant Saturday morning last. Both sides viewed the game as a chance for some silverware this season after a disappointing league campaign in their respective divisions.

Mullingar started strongly, forcing Portlaoise 'keeper Hubert Siller into early action, while Andrew Goggin was defending well for Portlaoise at right full-back. Portlaoise slowly got into the game , with Calum Leonard making a fine run and Imran Shitta setting Thomas Swords up for an effort that went just over the crossbar.

At the other end Ben Dwyer and Luke Makem were doing well to contain the Mulligar number nine who was causing problems . After an exchange of corners Mullingar took the lead on twenty minutes with some neat interplay in the box , resulting in a close range finish.

Portlaoise were under pressure at this stage, with Imran Shitta doing trojan work in midfield and Andrew Goggin doing like wise in defence to keep Mullingar at bay.

From a breakaway Matteusz Kocoon went close with a long range effort, but within minutes Mullingar had doubled their lead when slack defending lead to goal number two. Portlaoise, to their credit, lifted their game, with Calum Leonard putting in great effort and Thomas Swords twice going close, but despite their efforts the score remained 0-2 at half time.

The second half saw Portlaoise take complete control of the game as they tried to keep the tie alive for the second leg. Matthew Walsh was putting in some fine tackles at left full, with John Ging and Cameron Clarke working hard and putting the Mullingar defence under pressure.

Playing some neat football, Portlaoise created chance after chance, with Thomas Swords and Sean O’Sullivan bombarding the away goal with shots but unfortunately none rattled the net.

With time running out Calum Leonard won a corner for Portlaoise. Ben Dwyer’s original kick saw the ball return to him, and from his follow up cross Imran Shitta stroked home to give Portlaoise a lifeline for the second leg, a goal his excellent overall play deserved.