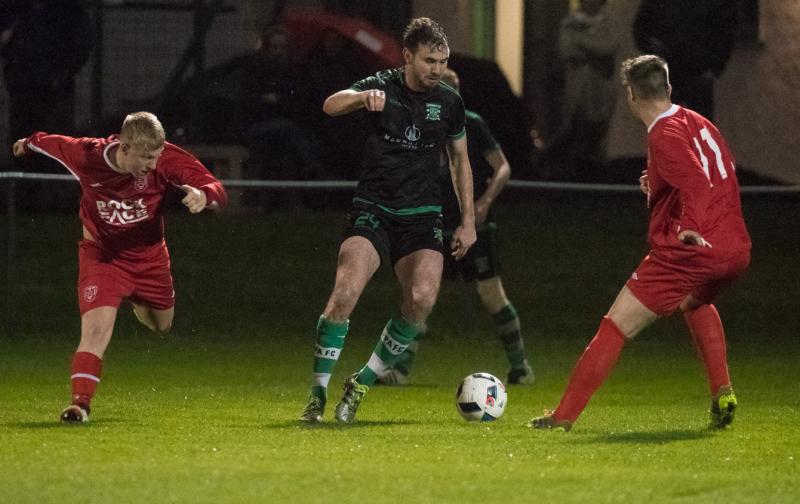 Mountmellick man Colm Coss’s extra-time goal proved to be the decisive one on Saturday, as Portlaoise advanced to the Lummy O’Reilly Cup final with victory over a strong Maynooth University outfit.

Portlaoise started brightly, with Colm Poole’s shot from distance flying way over the crossbar. However, after a solid opening ten minutes from Portlaoise, Maynooth University grew into the game and were the better team for most of the first half.

Teenage goalkeeper Sean McCormack came to Portlaoise’s rescue on multiple occasions throughout, no more than when he denied Gary Daw’s free-kick attempt just outside the penalty area. From the resulting corner, Eoin McDermott’s header went inches over McCormack’s crossbar.

There were a few half-chances for both sides in the remaining first half, but the defences were certainly on top as the sides went in goalless at the interval.

Portlaoise had their first clear-cut opportunity when Colm Coss controlled a set piece, and laid it into Eoghan White, who forced a remarkable save from David Stevens.

Maynooth University’s Eoin McDermott then nearly pulled off a special goal, as he took Cillian Duffy’s cross into his feet and produced an overhead kick that nearly came off.

Portlaoise were much better in the second half from an attacking sense. Oisin Fitzpatrick delivered an inviting delivery to the back post, but Shane Collins couldn’t get a hold of the volley.

Maynooth should’ve then opened the scoring through Eoin McDermott. Substitute Darragh Pelgum robbed Portlaoise of possession near the half-way line, crossed it into the path of McDermott, but he missed a sitter in front of the goals.

Portlaoise introduced Jason Caffrey, Danny Molloy and Jody Dillon half-way through the second half, and they provided fresh legs. Caffrey and Dillon nearly combined when Dillon got on the end of Caffrey’s set piece, but couldn’t direct it on target.

Both sides failed to create that one clear-cut opportunity that was required, and Eddie Reilly’s whistle meant we were heading into extra-time.

Colm Coss, who was to be the hero in the second half of extra-time, but he could’ve scored in the first. Maynooth failed to clear their lines from a corner, and it fell to the tall midfielder, but his close-range effort cannoned off the bar and out to safety.

Sean McCormack continued his impressive goalkeeping display with another save at the end of the half, this time denying Puyan Farimand.

On the restart, Portlaoise’s goal came, much to the ecstasy of the sizeable home crowd. Colm Poole’s corner ball didn’t look to cause any harm, but a calamitous display of goalkeeping from David Stevens allowed Colm Coss a tap in.

Portlaoise had a penalty from Jason Murphy saved near the end, but they hung on, and have a big cup final to look forward to.