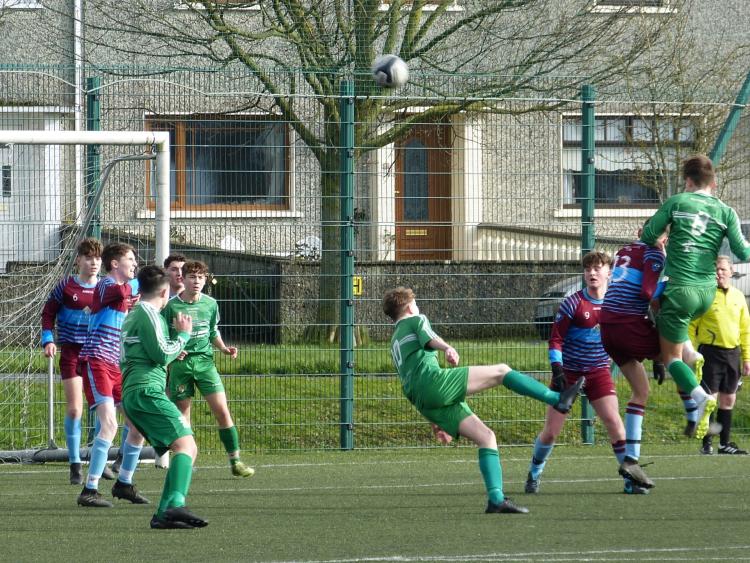 Portlaoise AFC welcomed Kilbeggan FC to Portlaoise Leisure Centre on Saturday, with the howling wind giving AFC the advantage in the first half.

The opening exchanges saw all the pressure come from AFC with a few shots and several corners from the attacks but no goals. Robbie Farrell had two good chances with the second producing a fine save, but Thomas Swords was just unable to get to the loose ball before the Kilbeggan keeper.

Halfway through the first half and the pressure produced a very unlikely breakthrough as a Ben McDonald cross from the right side saw the breeze and an unfortunate mis-step by the keeper allow the ball float into the top middle of the empty net. It was 1-0 to the home side and as the saying goes, 'they all count!'Q

Imran Shitta and Robbie Farrell were doing well in midfield to keep the tackles going in to break down any possession Kilbeggan tried to build on, but AFC weren’t at their best and could only manage to score one goal with the wind advantage in the first half.

The second half started the same as the first but AFC had a little more intent. Cathal Lee forced a corner out of the keeper and Jamie Toman saw his left foot effort from the left side of the box saved.

On 42 minutes there was a big scare for AFC as Kilbeggan struck the post and the rebound was unable to be punished by the second Kilbeggan attacker when AFC were totally switched off and caught out in the middle and at the back. Two minutes later there was relief when it became 2-0. Ben McDonald, Jamie Toman and Conor Brown worked to get the ball into the box and Cathal Lee was there to tap home on the line.

Cian Moore fired a super ball over the keeper five minutes later but the keeper just got his fingers to it for a corner. Cian took the corner and Robbie Farrell got in just before Jamie Toman in the box to make it 3-0.

Within two minutes Ben McDonald and Cathal Lee linked up to provide a chance for Robbie Farrell who drilled it low and left into the net to make it 4-0. AFC were enjoying one way traffic but to be fair the guys in the middle and at the back were doing a good job of marshalling even a sniff of a Kilbeggan break.

Ryan Mitchell made a super run through from near halfway and fired a great shot in but the Kilbeggan keeper saved it and Ryan also had a tougher second attempt on the volley, but just missed. The next next minutes saw two more goals from Cathal Lee and a drive from Kieran O’Donnell into the top corner to make it 6-0.

Seven minutes to go and 7-0 came with the score of the match from a rampant Conor Brown running powerfully down most of the left side and striking a powerful ball into the far bottom corner from 18 yards.

Ben Doyle was unlucky not to make it eight after a lovely samba touch to take out the defender with a flick over the defenders head and then just fired over the bar on the volley.

The clock was nearly dead and time for another nail in the Kilbeggan coffin to seal it at 8-0. Ben Doyle’s first time pass from the right back area to Cathal Lee who passed quickly to Thomas Swords, who waited for his chance as he bore down on goal and then smashed the ball into the far right.

A comprehensive win for Portlaoise AFC that still required a lot of battling. Robbie Farrell was awarded the referee’s Man of the Match for a strong battling display and a few goals to boot.