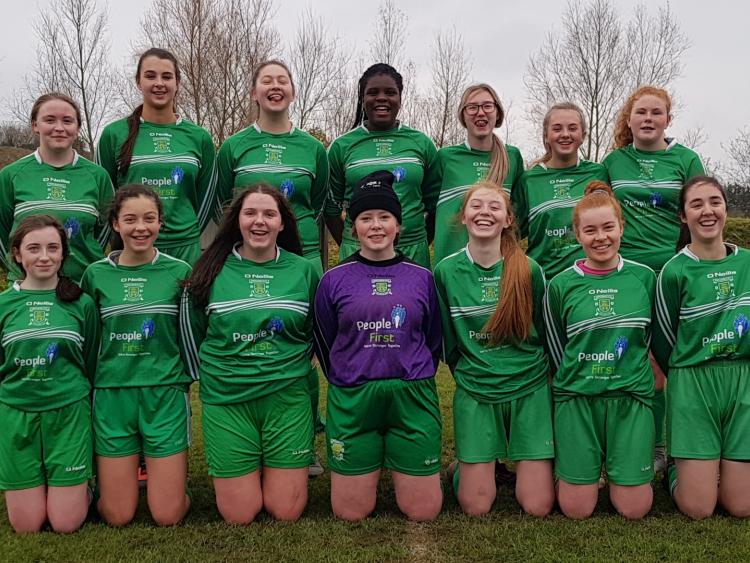 Portlaoise hosted Killeigh in the MSL U18 Ladies League tie at the Portlaoise Leisure Centre in calm cold conditions over the weekend.

Portlaoise, who had been soundly defeated last month at Killeigh, were determined from the outset to make amends for their previous encounter.

Portlaoise quickly got a hold in the middle of the field and were able to build a platform to attack their opponents.  Sophie Scully was thwarted when ready to shoot after a great run down the left wing, and then Lateefat Ganiyu was unlucky to have the ball touch her hand as she turned a defender after receiving a sweet pass from Chloe Cuddy.

In the ninth minute, a great interchange of passes between Chloe Cuddy and Ellen Rowney created an opportunity for Lateefat Ganiyu to sidestep the centre-half and place the ball in the net beyond the keeper’s dive, to give Portlaoise the opening goal and an early lead.

As expected Killeigh responded and began to ask questions of the Portlaoise defence. The three Leah’s, Malone, Nolan and Byrne, along with Mary Grehan were in excellent form clearing their lines time and again along with finding their midfielders with well-delivered passes.

Portlaoise doubled their advantage in the 14th minute when an excellent intervention, telling run and great through ball from the wonderful Leah Malone put Lateefat Ganiyu in the clear once again and she calmly slotted the ball beyond the advancing goalkeeper for her’s and Portlaoise’s second goal of the game.

Portlaoise goalkeeper Mairead Keane was then called into action to make a smart save from the Killeigh striker. Within minutes it was three-nil to Portlaoise when the skilful winger Rachel Horan linked-up well with Ava Prendergast who in turn placed Sophie Scully in to run directly at the Killeigh defence and drive the ball low and hard to the net from 14 meters to give Portlaoise a deserved three-goal cushion.

On the cusp of half-time, the Portlaoise ladies made it four when that girl, Lateefat Ganiyu, finished with aplomb having been set up through good work from Eva Cullinane and Chloe Cuddy.

Portlaoise manager Ken Peacham introduced no less than six subs moments after the resumption. Killeigh went into the ascendancy for a ten-minute spell during which Mairead Keane had to come smartly to the edge of the penalty area to clear a menacing attack. In the 7th minute of the half Killeigh pulled a goal back to make things interesting.

The Portlaoise team wrestled back control of the middle third through the tremendous efforts of Taylor Leavy, Roisin Fitzpatrick and Corinna Hayes.  Up front Ailbhe Quinn and Isabelle Peacham were causing many problems for the overworked Killeigh defence.

Twenty-five minutes into the half Ailbhe Quinn broke onto a great pass from Ellen Rowney and blasted to the net. Eva Cullinane had a firm drive well saved after executing a great one-two with Ellen Rowney.

Player of the match Lateefat Ganiyu completed the scoring with her fourth of the game on the stroke of full time having been beautifully set up by Ava Prendergast.

Overall this was a fine collective performance and very encouraging first victory of the season for this relatively young side under the guidance of Ken Peacham.