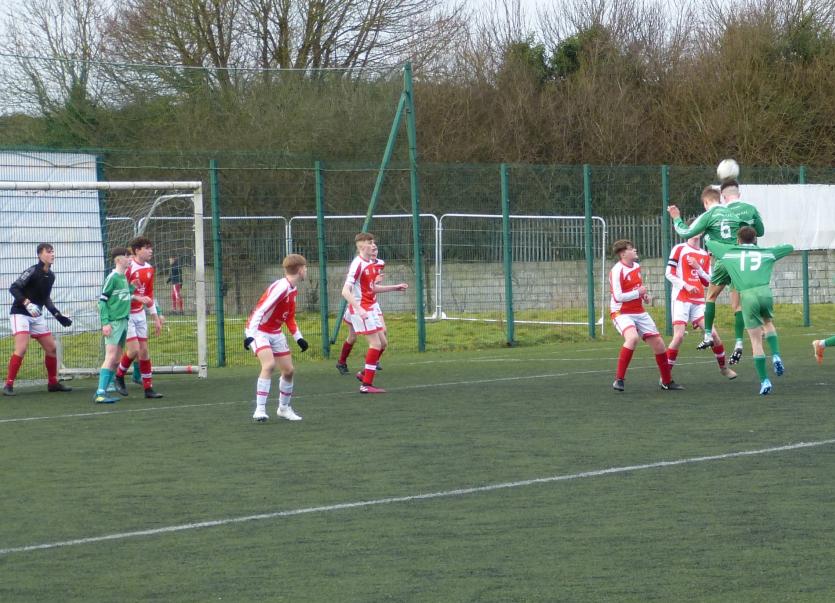 Portlaoise Leisure Centre was the venue for the first game of the new year for Portlaoise AFC and Emo Celtic. With a long break since the last competitive fixture for Portlaoise, Emo were perhaps hoping to maybe catch AFC before they could shake off the holiday cobwebs.

Both sides were missing players and AFC took control of the game from the off. Portlaoise enjoyed comfortable possession from the off with a lot of passing the ball around in the Emo half but without any breakthroughs to try and get past the towering Emo back-line.

A free kick by Robbie Farrell from 25 yards out, conceded for a push in the back, was saved by the Emo keeper marking the first real effort on goal.

With 17 minutes on the clock the next chance for Portlaoise AFC as persistent pressure created a chance that Cian Rafter, Robbie Farrell and Jamie Toman had the option to have a go but then all were closed down and smothered out by Emo defending.

Five minutes more of huffing and puffing was capped with the long-awaited opening goal for AFC. A lovely flighted cross in from the left corner area by Kanye Tshula saw Ben Doyle outjump the keeper to head home to make it 1-0 and ease the tension.

With 35 minutes gone, Portlaoise AFC had a few chances with Kanye Tshula and Jamie Toman forcing saves from the Emo goalkeeper. Then Emo had their first chance when they got the better of the AFC defence, but the shot under pressure was saved by Hughie Siler in the Portlaoise goals.

Instantly on the break, Ben Doyle went down the other end and his shot went just wide of the right post. Action at last to finish a half that had not been one for the purists.

Five minutes into the second half and it was 2-0 from another header, this time from Daniel Gorman, after a high cross from the wide right from Lee Smyth.

51 minutes brought more success after a lengthy substitution process for the Emo keeper and tactical changes for the Emo side. After a scramble around the box area, a breaking ball fell towards Ben Doyle who beat the outrushing defence and the keeper to lob them all and finish very well for his second to make it 3-0.

Doyle had a great chance to bag his hat-trick with a shot that just cleared the crossbar, but he did indeed get his hat trick after a quick throw by Kanye Tshula on the left and superb control by Robbie Farrell sent Doyle running in on the left corner where he beat the keeper with the outside of the foot at the near post. A good team effort to make it 4-0 on 63 minutes.

In between these two Doyle chances, Hughie Siler pulled off a fine save to deny Emo a golden chance from close range.

Their fifth goal arrived a minute later a fine cross from the left by Jamie Toman and Daniel Gorman finished his volley coolly from the penalty spot to get his second.

Portlaoise sewed up the game with a cracking finish by Ben Doyle to bang his fourth into the roof of the net and top off a good day for the captain on the day getting the Referee’s Man Of The Match nod too.

Mentions must also go to Colin McEvoy and the ever consistent Ben McDonald at the back who mopped up any potential threat that Emo tried to muster and sent the ball back into attacking danger areas. Daniel Gorman was also excellent in taking his chances up front.