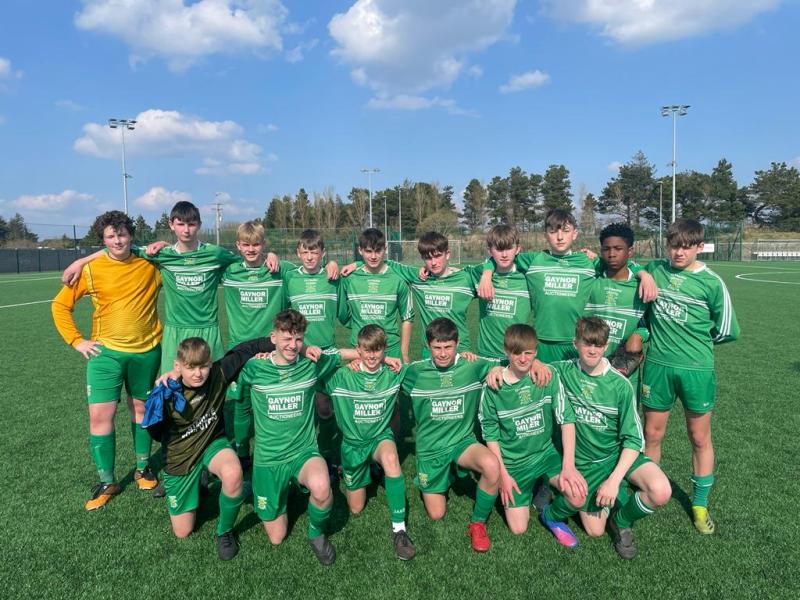 In glorious sunshine conditions, Portlaoise AFC under 15s made the long journey to Salthill on Sunday to contest the Quarter final of the U15 National SFAI Cup. Salthill got the ideal start by scoring the opening goal in the second minute following some nice build-up play.

To the credit of the Portlaoise team, they didn’t let the early goal faze them and made the perfect response by equalising in the sixth minute when Pete Culleton finished a well worked move by Dylan McCarthy who sent him through on goal. With the advantage of the equalising goal to settle the nerves, Portlaoise grew in confidence and dominated the possession during the remainder of the first half.

With only a few minutes left in the first half, the pressure began to tell and Portlaoise took the lead when Dylan Daly scored with a sublime finish following some build up play by Aidan Byrne and Elijah Emmanuel. From the start of the second half, Salthill Devon started on the front foot and looked a different team after the half time team talk. They began to create some chances from set pieces and went close several times. The equaliser eventually came with 15 minutes to go when the Salthill striker reacted first to a well-placed ball over the defence and finished with a tidy finish to the left of Cian O’Neill.

Ireland V Lithuania: Everything you need to know

In the warm conditions and constant Salthill pressure, they managed to grab a decisive lead with 10 minutes to go when their centre half reacted first in the box with a header at the back post following a corner kick. With time running out to grab an equaliser and force the game into extra time, Portlaoise went up for broke and were unlucky to get caught on the counter attack with a fourth Salthill goal which put an unfair reflection on the result.

Although the result didn’t go their way, Portlaoise can hold their heads high as they contributed to a fantastic game of football which was played in a respectful and sporting manner which is a credit to their coaches and parents. Sadly, the journey in this competition now ends for this Portlaoise squad but can now use this experience to good effect in their remaining league and cup campaign with three trophies still to play for in the coming weeks.

On this occasion, best for Portlaoise were Alex Danne for a towering defensive display and Sean Lalor and Pete Culleton for controlled and dominant midfield displays. As always, the boys did the club, their coaches, and their parents proud with their positive attitude and upbeat spirit. We are so proud of this squad, who have grown and developed into a brilliant group.

Finally, thanks to all the parents for travelling to Galway on Mother’s Day and for providing refreshment at our home games and generally supporting the squad throughout the season.

In Pictures: Ireland draw with Belgium in centenary fixture