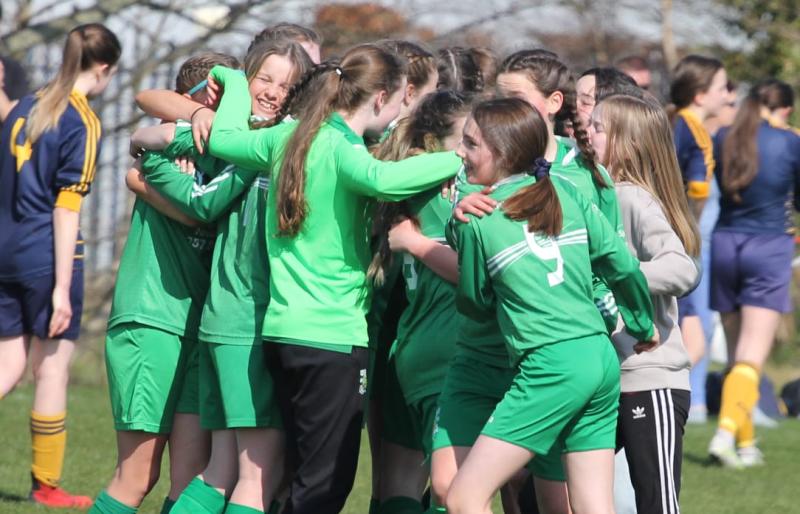 In a first for Portlaoise underage girls’ teams the U14's lined out in the SFAI Cup Quarter Final away to Clonee.  A beautiful spring day with bright sunshine and a light breeze added to the sense of occasion.

At the later stages of a national competition the Portlaoise management team were expecting a very high standard of opposition and Clonee did not disappoint in the opening exchanges. Right from the kick off it was clear that Clonee were a good team with a strong passing game.

The opening 10 minutes were controlled by Clonee based on a strong possession game. The Portlaoise girls just managed to get a foot in here and there, but Clonee held onto the ball with slick passing moves. During this phase several threatening attacks were mounted down the left side of the Clonee attack and pressure mounted on the Portlaoise defence.

On the 10-minute mark that pressure told, with an excellent through ball being played from midfield. The Clonee left winger cut inside, drove into the penalty box and slotted home an excellent finish that gave the on rushing Doireann Brennan no chance.

Clonee continued to attack after their goal, but Portlaoise started getting more of a foothold in midfield with Emma Francis and Sally Morgan quickly closing down their opposite numbers, which cut off supply to the Clonee attackers.

The hot day water breaks were in effect and the first one allowed the Portlaoise team to reset. The Portlaoise defence of Holly Murphy, Niamh Dundon and Emily Flynn started to look more comfortable. The midfield started to link up with the attacking trio of Keelin Moore, Ciara Breslin and Anna Keegan.

The levelling goal still came as a surprise when the Clonee keeper spilled a ball that she seemed to have had in her control. This was pounced on by Ciara Breslin to pass into an empty net to the delighted of the travelling fans.

The game became more end to end with Clonee having a good opportunity from a free kick. However, Portlaoise had the bit between their teeth and were rewarded with a second goal. A long-range effort from Saoirse Carroll found the back of the net, despite the Clonee Keeper getting a hand to it on the way in.

At half time Portlaoise had a deserved 2-1 lead. The game remained finely balanced in the second half. Portlaoise showed their strength in depth with the introduction of Maisie Kerry and Elizabeth O’Connor which brought some fresh energy on a hot, energy sapping afternoon.

Clonee continued to push on, but their main threat was reduced to a handful of dangerous crosses from corners and free kicks. Portlaoise looked more likely to score again from play, but some last-minute interventions from the Clonee defence meant that the goal never came.

With the wind at their backs and Clonee pushing on the game became compressed and a real battle in midfield. Space was at a premium; work rate rather than skill became the difference between the two teams.

Portlaoise put relentless pressure on the ball and the oppositions frustration brought some niggle to the game. With time winding down the real tension of knockout football was clear for all to see. Clonee continued to threaten with corners and free kicks, but never created a clear-cut chance due to a rock solid back three for Portlaoise.

In typical cup fashion, five minutes of additional time were added to the delight of the home fans and to the away fans it seemed like a few extra were added on top of that.

It is hard to call out in the individual performances without listing out the full team and subs. Sally Morgan and Emma Francis put in huge work in central midfield ably assisted by their wingers, Leah Brophy and Aoibheann Bourke.

The forwards always made themselves available and closed down the opposition defenders, the Portlaoise defenders grew more and more confident as the game went on. And with another solid and cool performance by Keeper Doireann Brennan, Clonee would have needed another full 70 minutes to grab the equaliser.

This win was a result of a huge effort from every member of the squad, and they were full value for their victory. They now progress to the SFAI Cup Semi Final. A huge achievement.