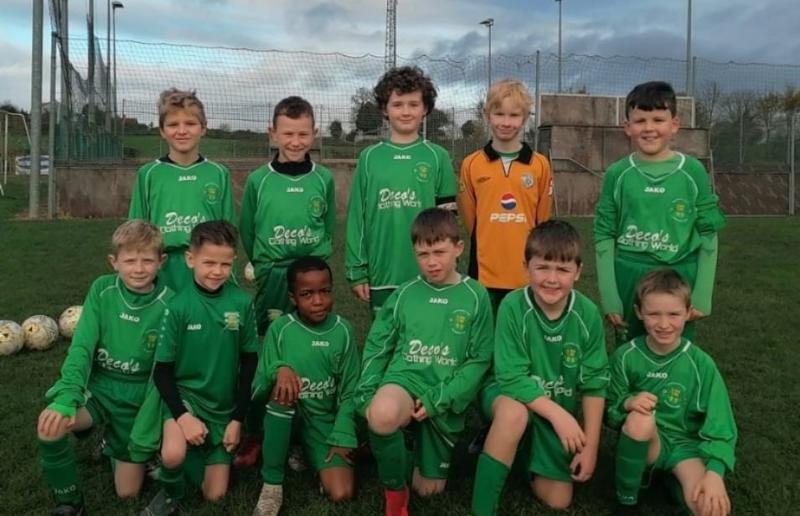 Portlaoise Town under 10s faced Birr town away on Saturday afternoon for a 12.15pm kick off. This was the first leg of the quarter final of the cup competition.

The game started at a frantic pace with some great play from both sides. Portlaoise took the lead inside 5 minutes with a well placed finish from Ryan Jacob. Birr would hit back immediately to level the game at 1 a piece. Jacob would give Portlaoise the lead again soon after with a great individual effort.

The rest if the half was much more composed from both teams with some excellent defending at the back for Portlaoise from both Harry Ryan and Michael Dziewonski. Birr did get the game back level but it would be Tafara Zhou who would have the last say in the half with a thunder bolt of a shot that gave the Birr keeper no chance and would give Portlaoise a one goal cushen going into half time.

Portlaoise came out for the second half like a team on a mission. There passing game really got going and Birr struggled to get to grips with the pace and precision of the Portlaoise play. Just 30 seconds into the half Portlaoise scored one of their best worked goals of the year. It would start at the back with Ben McCormack and the ball was worked the length of the field with one touch football from Kian French, Ronan o Gorman and Ryan Jacob where the ball would eventually find its way to the feet of Zach Bowe and he would make no mistake with the finish.

Portlaoise would grow in confidence from here and looked to take control of the cup tie with a dizzying spell of soccer that would see them add a further four goals in just 8 minutes. First it was Ryan Jacob who completed yet another hat-trick for Portlaoise, one of many so far this season. Then it was the turn of Ben McCormack who found himself in the right place after some brilliant work from Kian French and Zach Bowe. Zach would them grab his second and Jacob his 4th after a brilliant through ball from Harry Brady. It was then Brady who bagged Portlaoise's last goal with the finish of the day, an unstoppable effort from the edge of the box.

To Birr's credit they worked themselves back into the game and were the better side for the last 10 minutes and would go on to score two goals to make the score 9-4 at full time. This result will fill Portlaoise with confidence going into the second leg of the cup tie where they will be very hopeful of making the semi final stages.

Player of the match: Zach Bowe.