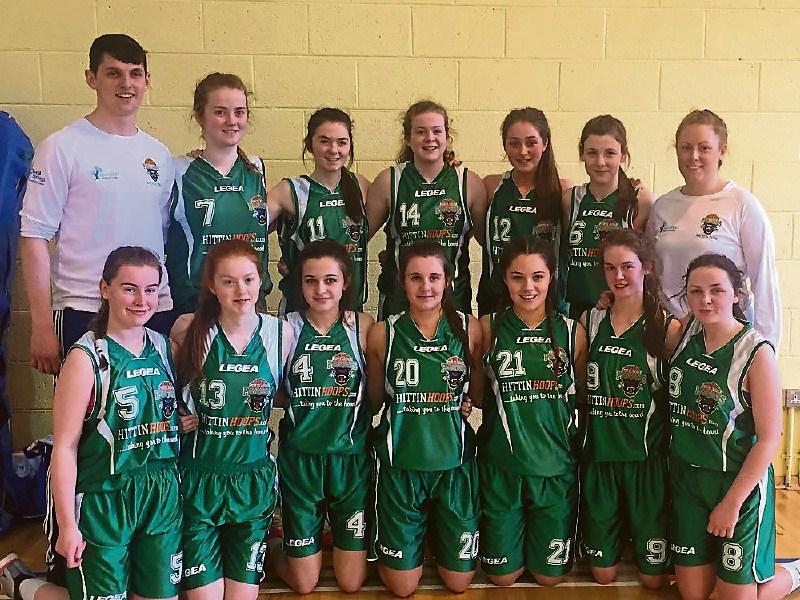 The team had four games in the group stages with only the top two making the semi-finals. They took on the mighty DCU Mercy in the first game and played extremely well losing out by 12 points to the DLBB side.

This was always going to be a very tough game. Both teams had a good knowledge of each other's strengths having played twice already this season in schools competitions. The teams were well matched in the first half and DCU got the lucky break that was needed to decide the contest in the second half. Portlaoise never gave up and fought right to the very end to secure their closest defeat to this team all season.

This competition is as tough as the girls have ever played in but they took it all in their stride as they beat a very good Kerry side KC Cougars in the second group game. They were determined to win this game and keep themselves in the hunt for a semi final spot.

Fr Matthews of Cork provided the third opposition. This was potentially the game that would decide the final pool placing. Panthers started well but as tiredness started to kick in they allowed the Cork side to build up a nine point lead and made it difficult for themselves going into the last 10 minutes of the game.

However the fight and passion of this group of girls started to show as basket by basket they made a big dent in Fr Matthews lead. There was just two baskets in it going into the final quarter. It was essential that they picked up the first scores of the quarter and the girls ensured that this happened. For the first time since the seconds quarter they took the lead and refused to allow their opponents get back into the game. Portlaoise held on for a five point win and pretty much secured themselves a semi final spot.

The final group game was against Blackwater Steelers from Monaghan. The fatigue had got in on the girls for this one after three tough games and it showed on the court. That fighting spirit was not the same as they had shown in previous games. However something clicked going into the final quarter and out of nowhere they had turned a 13 point deficit into a 1 point lead with just seconds to play. This was a testament to the belief that they had in themselves.

A semi final against Glanmire was next up. After a well deserved rest Panthers were fired up for this game. The game was end to end from start to finish and there was only the minimum between the teams at half time. With only 6 minute quarters, all it would take was a good run from one team to gain momentum and a lead that would be hard to pull back.

Unfortunately for Portlaoise it was the Cork side that got that lucky break and it was too much to pull back in the final quarter. They left everything on the court on Sunday and should be proud of themselves to have come so close to making an All-Ireland final.

After the disappointment of the semi-final defeat the girls still had to go out and play a sixth game of the weekend to a determine third or fourth place finish. They faced a very talented galway side in Maree.

This was always going to be a tough game for both teams having already given everything for five games. Again it was another well matched game with both teams determined to have one final win. A three-pointer from the Galway side late on in the game gave them a four point lead that, with little time left on the clock, was just too much to ask of Panthers to reel them in. Maree held out to win by five points.

To finish fourth in the country at 'A' level is an unbelievable achievement and this bunch of players couldn't be more deserving of it. Every one of the 12 girls showed heart, determination, fight and most importantly pulled together as a team and showed the biggest clubs in the country that Portlaoise Panthers are a force to be reckoned with at underage.

The coaches, club, parents and the Midland area are super proud of what this group has achieved and know it's only the start of thing to come for a lot of the girls.