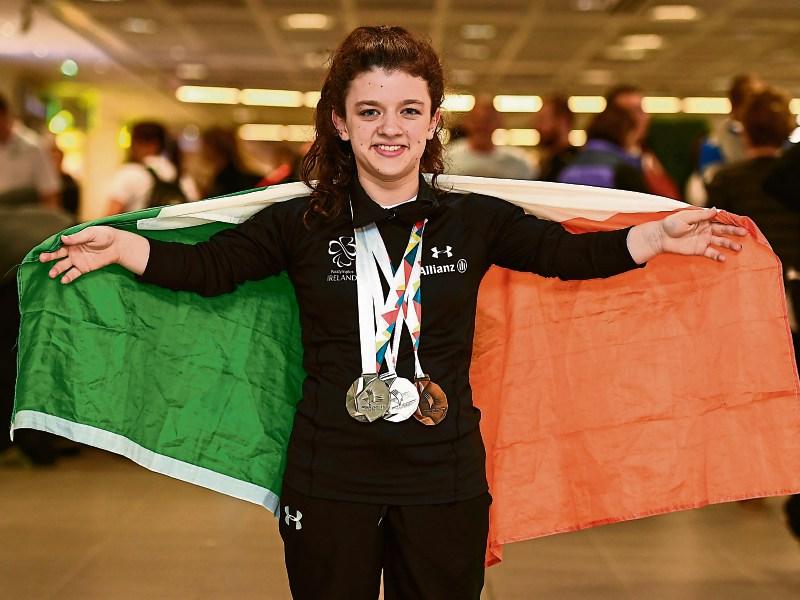 Nicole Turner with her medals from the IPC finals, at Dublin airport.

Nicole Turner was the toast of Laois sport in May, as the Portarlington girl won three medal at the IPC European Finals in Portugal.
Despite being just 13 years old, Turner saw off top class Paralympic competition in the games to win two silver medals and one bronze, putting herself right in the mix to be selected for the Irish team to the Paralympics later in the year.
Turner won her silver medals in the 200m Individual Medley and 100m Breast stroke, while her bronze came in the 50m Butterfly. She was left to wait until June to find out whether she would be given a seat on the plane to Rio.
Nicole wasn't the only Laois athlete enjoying success on an international stage in May, as Paul Byrne and Barry Pender both secured qualification for the European Indoor Championships during the month. It was an incredible achievement for both men, and also for their club, St Abban's, who would have two of their athletes compete at a major international event.
Denis Donoghue, from Portlaoise Gymnastics club, was also getting good news in May, as he was chosen to work as a judge at the Olympic Games in Rio, having previously officiated at the London Olympics.
The month of May also saw the Laois senior footballers begin their Leinster SFC campaign, beating Wicklow 3-18 to 0-18 in O'Moore Park. The minor footballers secured their place in the Leinster semi-final with a dramatic one point win over Louth, 2-10 to 1-12, Johnny Kelly kicking the winner in injury time.
Laois' U-21 hurlers saw their season begin and end on the same day, as they lost to Carlow 1-17 to 1-15 in Dr Cullen Park.
On the club scene, Portarlington saw themselves expelled from ACFL Division 1 after they twice failed to field a team in the competition, with the Laois Ladies SFC began in May. There were opening round wins for Sarsfields and St Brigid's.
In rugby, Portlaoise's U-13 and U-15 teams had reason to cheer, the U-13s winning the Midlands League and the U-15s winning the Leinster Plate. The Portlaoise U-14 soccer team also wrapped up the 'A' Major Division in May.
Elsewhere in soccer, there was disappointment for Stradbally Town in the Michael Dolan Division 1 Cup, as they lost 2-0 to Clara.

“Before I went I knew I might have a chance at winning a medal, but to come back with three is amazing.”

- Nicole Turner, as she announces her potential for the year ahead with three medals at the IPC European Finals.

- Nicole Turner's mother, Bernie, reveals the lengths she is prepared to go to in order to realise her Paralympic dreams in Rio later in the year.

“I've never seen a championship match won easily. Now, it might happen for someone like Dublin, if you are playing Division 1 against Division 4, but we are not far enough away from Wicklow to have any degree of complacency. We know to get a result out of the Wicklow game we are going to have to work, and work bloody hard, and do it for the full duration of 74 or 75 minutes. There's no other way for us."

- Laois manager Mick Lillis lays it on the line for his side ahead of their game against Wicklow, knowing only putting their shoulder to the wheel will be good enough.

“The next day, it's not David and Goliath, it's probably David and Goliath's bigger brother. I think the nearest anybody has come to Dublin in the last three or four years is 12 or 14 points."

- Mick Lillis sets the scene after Laois beat Wicklow to set up a meeting with Dublin in Nowlan Park.

“Laois GAA would like to inform supporters no tickets for the Laois v Dublin Leinster SFC Quarter Final are likely to be available on the day of the game. The game will be a sell out and we appeal to all Laois GAA Supporters to purchase their tickets as soon as possible."

- A Laois GAA statement prior to the game with Dublin. They needn't have been too concerned, because, as it turned out, there were plenty of spare tickets for the game.

"Let's be honest, we are seen as cannon fodder here, in so many ways, and that's the perception that is out there, but we'll be going out to give the best account of ourselves possible."